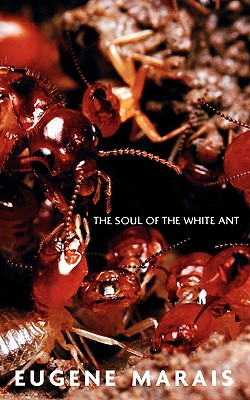 The Soul of the White Ant

This book by Eug ne Marais is a passionate, insightful account into the world of termites. It is a meticulously researched expose of their complex, highly structured community life.

Originally translated into English in 1937, the quality of research remains as relevant today as it was when it was first published. This illuminating account will not only appeal to those with a scientific interest in termites, but will similarly enthrall readers who are new to their captivating world. An exceptional feature of his detailed research is the extraordinary psychological life of the termite.

While the studies are based in South Africa, the extensive research also includes the termites of Magnetic Island, Australia. You will be taken on an exciting journey into the amazing life of termites, as their astonishing world of hierarchy and roles within their community is revealed in captivating detail.

His years of unceasing work on the veld led Eug ne Marais to formulate his theory that the termite nest is similar in every respect to the organism of an animal. He observed that the workers and soldiers resemble red and white blood cells, while the fungus gardens are the digestive organ. The queen functions as the brain, controlling the collective mind, and the sexual flight of the kings and queens is similar in every aspect to the escape of spermatozoa and ova.

"I have never read a book written in such a unique style. It is as though Eugene Marais breathes life into the words, animating the lives and struggles of the white ants in such a way that they almost seem human."

"As a safari Guide in the Okavango Botswana for many years, I used this book as a basis for presenting a fascination for the smaller creatures of the African bush, my home for my entire life and which I was privileged to share with many clients from different countries. Termite mounds are really interesting and Eugene Marais compared the infrastructure of a termitary to that of the human body. Writing from the heart, this scientific author instills a wonder in the reader, of the incredible intracacies of nature, in a light-hearted, easily readable manner."

"This book doesn't quit when it comes to fascinating insights about termites. I read it with almost no knowledge of what these tiny creatures are capable of, and I was transfixed by these rich and complex insect societies. For the layman, this is an entertaining and informative introduction to a very amazing creature."

1) The Beginning of a Termitary
2) Unsolved Secrets
3) Language in the Insect World
4) What is the Psyche?
5) Luminosity in the Animal Kingdom
6) The Composite Animal
7) Somatic Death
8) The Development of the Composite Animal
9) The Birth of the Termite Community
10) Pain and Travail in Nature
11) Uninherited Instincts
12) The Mysterious Power which Governs
13) The Water Supply
14) The First Architects
15) The Queen in her Cell