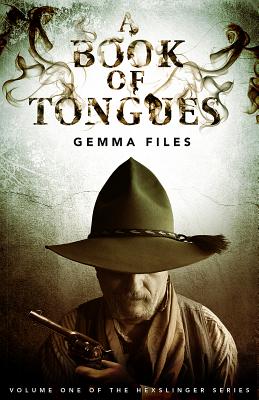 A Book of Tongues

Volume One of the Hexslinger Series

Two years after the Civil War, Pinkerton agent Ed Morrow has gone undercover with one of the weird West's most dangerous outlaw gangs-the troop led by "Reverend" Asher Rook, ex-Confederate chaplain turned "hexslinger," and his notorious lieutenant (and lover) Chess Pargeter. Morrow's task: get close enough to map the extent of Rook's power, then bring that knowledge back to help Professor Joachim Asbury unlock the secrets of magic itself.

Magicians, cursed by their gift to a solitary and painful existence, have never been more than a footnote in history. But Rook, driven by desperation, has a plan to shatter the natural law that prevents hexes from cooperation, and change the face of the world-a plan sealed by an unholy marriage-oath with the goddess Ixchel, mother of all hanged men. To accomplish this, he must raise her bloodthirsty pantheon from its collective grave through sacrifice, destruction, and apotheosis.

Caught between a passel of dead gods and monsters, hexes galore, Rook's witchery, and the ruthless calculations of his own masters, Morrow's only real hope of survival lies with the man without whom Rook cannot succeed: Chess Pargeter himself. But Morrow and Chess will have to literally ride through Hell before the truth of Chess's fate comes clear-the doom written for him, and the entire world.

Gemma Files is the winner of the International Horror Guild Award and the Black Quill Award. She has been nominated for the Lambda, the Stoker, and the Shirley Jackson Awards.
or
Not Currently Available for Direct Purchase