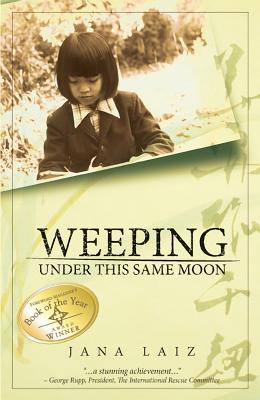 Weeping Under This Same Moon

ForeWord Magazine’s Book of the Year Gold Medalist and an International Reading Association Notable Book, Weeping Under This Same Moon is based on the true story of two teenage girls from different cultures, whose paths intertwine, dramatically altering the course of their lives.

Mei is an artist whose life has been disrupted by the Vietnam War. Her anguished parents send her away on a perilous escape during the exodus of thousands of Vietnamese refugees known as “Boat People.” In Mei’s words we learn of the dangers she faces caring for her two younger siblings on a sea journey fraught with hunger, thirst and deprivation, leaving behind everything she loves, to find refuge for her family.

Hannah is an angry seventeen-year-old American high school student. Friendless, neurotic, a social misfit—her passion for writing and the environment only intensify her outcast state. Through Hannah’s voice, we get inside her head, there to discover a gentle soul beneath all the anger and turmoil.When Hannah learns of the plight of the “Boat People,” she is moved to action.

Destiny brings Mei and Hannah together in a celebration of cultures and language, food and friendship, and the ultimate rescue of both young women from their own despair. Weeping Under This Same Moon is a testament to the power of love and the spirit of volunteerism; affirming that doing for others does so much for one’s self.

Jana Laiz is the author of the triple award-winning novel, Weeping Under This Same Moon, Moonbeam Silver Medal Winner, The Twelfth Stone, Elephants of the Tsunami, the co-author of "A Free Woman On God's Earth, The True Story of Elizabeth "Mumbet" Freeman, The Slave Who Won Her Freedom" soon to be a feature film, Thomas & Autumn, Simon Says ~ Tails Told By The Red Lion Inn Ambassador and Billy Budd in the Breadbox, The Story of Herman Melville & Eleanor. A former refugee resettlement counselor and ESL teacher, Jana believes that honoring diversity can change the world. She is passionate about our beautiful planet and endeavors to make a difference in the world through her writing. She is the very first Writer-In-Residence at Herman Melville's beloved Arrowhead. Her new book, Blanket of Stars will be out summer 2019. She lives in the Berkshire Hills of Massachusetts.