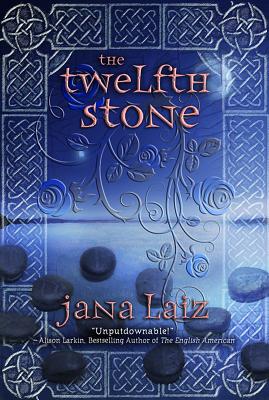 “Celtic faerie-lore comes to life in The Twelfth Stone. When a 21st-century girl comes face-to-face with the ancient world of faeries, we need no coaxing to follow along. With evocative imagery and a powerful environmental theme that bridges the two worlds, The Twelfth Stone will enchant.”
— Kat Goddard, The Bookloft, Great Barrington, MA
View the List

The faerie world is fading. Human greed is giving rise to the evilest of faeries. Only Rionnag’s marriage will prevent earth’s doom. But she will have none of it.

The Twelfth Stone is a Celtic American fantasy, adventure, romance and cautionary faerie tale for young adults & adults. Led by Fiona and Rionnag, the cast of characters runs the gamut from evil faeries to captured mortals, from destructive developers to secret lovers who meet only when the borders between the worlds open.

Jana Laiz is the author of the triple award-winning novel, Weeping Under This Same Moon, Moonbeam Silver Medal Winner, The Twelfth Stone, Elephants of the Tsunami, the co-author of "A Free Woman On God's Earth, The True Story of Elizabeth "Mumbet" Freeman, The Slave Who Won Her Freedom" soon to be a feature film, Thomas & Autumn, Simon Says ~ Tails Told By The Red Lion Inn Ambassador and Billy Budd in the Breadbox, The Story of Herman Melville & Eleanor. A former refugee resettlement counselor and ESL teacher, Jana believes that honoring diversity can change the world. She is passionate about our beautiful planet and endeavors to make a difference in the world through her writing. She is the very first Writer-In-Residence at Herman Melville's beloved Arrowhead. Her new book, Blanket of Stars will be out summer 2019. She lives in the Berkshire Hills of Massachusetts.