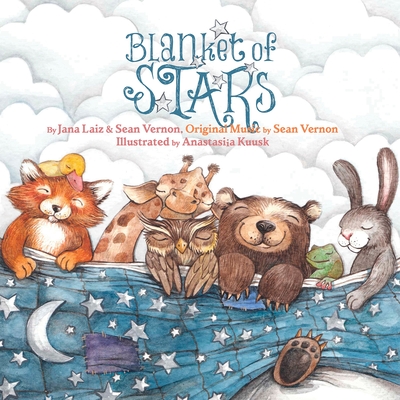 Night is falling on the hill. A busy world is getting still.

Join Little Bird, Little Bunny, Little Fox as they drift off into dreamland under a blanket of stars. Lull your little ones to sweet sleep with the lush illustrations and soothing lullabies of Blanket of Stars. Music included. Additional bonus tracks include Sean Vernon's original tune, "New Twinkle" as well as Sean's original music paired with poems by Christina Rosetti, Thomas Dekker, and Robert Louis Stevenson.

Jana Laiz is the author of the triple award-winning novel, Weeping Under This Same Moon, Moonbeam Silver Medal Winner, The Twelfth Stone, Elephants of the Tsunami, the co-author of "A Free Woman On God's Earth, The True Story of Elizabeth "Mumbet" Freeman, The Slave Who Won Her Freedom" soon to be a feature film, Thomas & Autumn, Simon Says ~ Tails Told By The Red Lion Inn Ambassador and Billy Budd in the Breadbox, The Story of Herman Melville & Eleanor. A former refugee resettlement counselor and ESL teacher, Jana believes that honoring diversity can change the world. She is passionate about our beautiful planet and endeavors to make a difference in the world through her writing. She is the very first Writer-In-Residence at Herman Melville's beloved Arrowhead. Her new book, Blanket of Stars will be out summer 2019. She lives in the Berkshire Hills of Massachusetts. Sean Vernon is a poet, singer, songwriter and writer. Sean holds an MFA from Iowa City Writers' Workshop and has been published in the Atlantic, Smithsonian and Backpacker Magazine. This is his first musical children's book.Sean loves to put poetry to music and has five albums of the settings of Emily Dickinson, Robert Frost, Shakespeare, Blake, Wordsworth and Yeats, as well as two albums of original songs. Anastasiia Kuusk is an Estonian artist and illustrator. This is her second children's book.