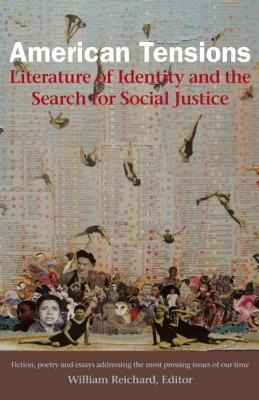 Literature of Identity and the Search for Social Justice

This anthology of contemporary American poetry, short fiction, and nonfiction, explores issues of identity, oppression, injustice, and social change. Living American writers produced each piece between 1980 and the present; works were selected based on literary merit and the manner in which they address one or more pressing social issues.

William Reichard has assembled some of the most respected literary artists of our time, asking whose voices are ascendant, whose silenced, and why. The work as a whole reveals shifting perspectives and the changing role of writing in the social justice arena over the last few decades.


Praise For American Tensions: Literature of Identity and the Search for Social Justice…

The best anthologies, like the one you’ve got in your hands right now, are full of wise, deeply felt writing that one reads with an intimation of eternity, as if one were looking up into the stars . . . Here is a generous portion of the best contemporary writing about contemporary issues, about our issues, compiled and present to us with generosity and enthusiasm . . . This book is a gift made to last.”
Ted Kooser, United States Poet Laureate 2004-2006 [from the Foreword]

This is a powerful collection of down-to-earth yet vivid snapshots of American
life in places and situations that the myth of the American dream makes us want
to ignore. By turn, it is startling, gritty, and haunting. The poems, short stories and excepts of novels are unsettlingideal for provoking conversation about the issues of injustice facing our society at this moment in history.”
Dr. Cris Toffolo, Chair, Justice Studies, Northeastern Illinois University, Chicago

When my friend, the writer and activist Alice Lovelace, shares her wisdom with
people contemplating social change work she begins with an admonition: Don’t
even begin to consider this journey unless you are prepared to be changed yourself.’ This volume should carry the same warning.”
William Cleveland, author, Art and Upheaval: Artists on the World’s Frontlines and Between Grace and Fear: The Role of the Arts in a Time of Change

"As a playlist captures the complex and sometimes competing forces within a relationship, revealing much about the essential interplay between composer and audience, so too does American Tensions provide a timely snapshot of our nation’s post-identity literary landscape and the real uses and purposes we make out of writing and reading."
Sam Woodworth, Fogged Clarity: An Arts Review

"The melting pot isn't an easy blend, as the boiling nature within it can prove quite nasty. "American Tensions: Literature of Identity and the Search for Social Justice" is a collection of fiction, poetry, essays, and much more from various authors who speak on the continued push forward as America tries to be that harmonious union of peoples up front, and the much darker conflict that lands underneath it all. Through literature and nonfiction, these writers provide many opinions and views to grant readers the many conflicting perspectives in our nation today. For those who want to gain a greater understanding in our nation's push for equality, "American Tensions" is a thoughtful and very highly recommended read."
Midwest Book Review

"The writers featured in American Tensions are both established and emerging, some with many publications, some with only a few, but what binds them together is that they are embodiments of the legacy of that melting pot sales pitch. Their stories reflect that American identity may owe a great deal to the constant reminder that it is not an assimilated, uniform everyperson, but a 'messy, fractious web of cultures, myths, relationships, and races.'"
-LJ Moore, SF Books Examiner