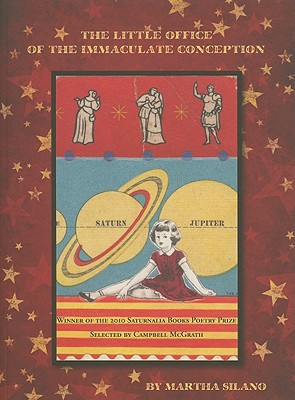 The Little Office of the Immaculate Conception (Paperback)

With humor and musicality, Martha Silano’s The Little Office of the Immaculate Conception rollicks through fourteen billion years of cosmology: galaxies, aliens, an astronaut’s dropped glove. When she’s not picking a bone with a shortsighted and side-talking populous, she’s conceiving her own personal Big Bang. When her nouns are diaper and bibs, Silano sticks to a larger vision, seeing past gelatinous mashed peas toward the moon and stars. This cosmic-consciousness is woven right in with the mittens and the meercats, her lens taking in not only the crumbs she must wipe up, but also polio-stricken nations, the hungry Eritreans, “the old man who shuffles along / as if he might be carrying / in that steamy bowl / all our children’s futures.” We’re all “sibling citizens of this swirly world,” writes Silano, but she knows that danger lurks not only in the heavens and the atmosphere, but also on our glistening streets. As Campbell McGrath notes, The Little Office of the Immaculate Conception is “comic and wise, quotidian and celestial.”

MARTHA SILANO is the author of two previous collections, Blue Positive and What the Truth Tastes Like. Her poems appear in journals including AGNI, American Poetry Review, Beloit Poetry Journal, TriQuarterly, and over a dozen anthologies, including Starting Today: 100 Poems for Obama's First 100 Days and The Best American Poetry 2009.
or
Not Currently Available for Direct Purchase
Copyright © 2020 American Booksellers Association