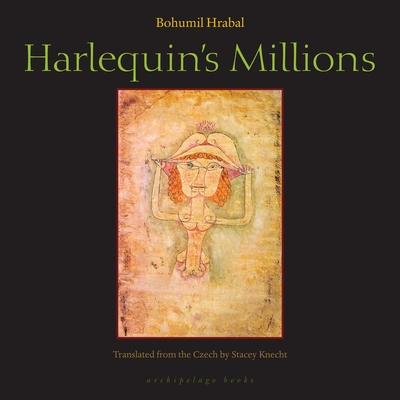 By the writer Milan Kundera called Czechoslovakia's greatest contemporary writer comes a novel (now in English for the first time) peopled with eccentric, unforgettable inhabitants of a home for the elderly who reminisce about their lives and their changing country. Written with a keen eye for the absurd and sprinkled with dialogue that captures the poignancy of the everyday, this novel allows us into the mind of an elderly woman coming to terms with the passing of time.

Praise for Too Loud a Solitude:

"Unmissable, combines extremes of comedy and seriousness, plus pathos, slapstick, sex and violence all stirred into one delicious brew." --The Guardian

"In imaginative riches and sheer exhilaration it offers more than most books twice its size. At once tender and scatological, playful and sombre, moving and irresistibly funny." --The Independent on Sunday

Praise for I Served the King of England:

"A joyful, picaresque story, which begins with Baron Munchausen-like adventures and ends in tears and solitude." -- James Wood, The London Review of Books

"An extraordinary and subtly tragicomic novel." --The New York Times

"Dancing Lessons unfurls as a single, sometimes maddening sentence. The gambit works. Something about that slab of wordage carries the eye forward, promising an intensity simply unattainable by your regularly punctuated novel." --Ed Park, The New York Times Book Review

Praise For Harlequin's Millions: A Novel…

"A surreal and loquacious tale. . . . Billed as "a fairy tale," the novel, at times, fancifully confounds expectations. . . and Hrabal's long, lyrical sentences (each chapter consists of a single paragraph) are not only eloquently constructed, but also as spirited as the scenes they illustrate." --Publishers Weekly (starred review)

"[A] uniquely compelling blend of parable, fantasy, social realism and testament to the power of storytelling. . . . the voice of the narrator is spellbinding, even as the reader becomes less sure of her credibility. . . . An enchanting novel, full of life, about the end of life." --Kirkus Reviews (Starred Review)

"Hrabal’s images and language, his anecdotes and precise observations create an exceptionally sensuous reverie about the passage of time. . . Hrabal elicits from his adult reader not just sweet Proustian melancholy but also a better, deeper appreciation of the bright but evanescent sunshine outside." -- Washington Post

"Knecht has guided this quiet book into an engaging, heartfelt experience without letting it drop into mawkish emofiction." -- Shelf Awareness

"You get to laze around in beautiful, page-long sentences deep with observation and memory. The rhythm and lyricism are powerful and subtle. I can’t believe I’m writing this. It sounds like a book I would detest. And yet it stays perched at the top of my longlist." -- BTBA Judge George Carroll

"The song ['Harlequin’s Millions'] infuses the book, a sad soundtrack to a novel that manages to be vibrant and wistful. Thanks to Stacey Knecht’s expert translation, one of the 20th century’s most inventive literary talents feels very much alive." — Malcolm Forbes, The Minneapolis Star Tribune

"Hrabal, to my mind, is one of the greatest living European prose writers." --Philip Roth, 1990

"There are pages of queer magic unlike anything else currently being done with words." --The Guardian

"Hrabal is a most sophisticated novelist, with a gusting humour and hushed tenderness of detail." --Julian Barnes

"What Hrabal has created is an informal history of the indomitable Czech spirit. And perhaps ... the human spirit." --The Times

"“Bohumil Hrabal, for all reductive purposes, is the Czech Proust: meaning, he’s of the same stirring brilliance, but also meaning that Proust is the French Hrabal. . . Few possess a voice as bold as any one of the many Hrabal has served up. . . What is not okay is to let him slip away from a mainstream eye, and stay reserved for readers looking to 'challenge' themselves." -- Tweed's Magazine of Literature and Art

Bohumil Hrabal (1914-1997) worked as a railway dispatcher during the Nazi occupation of then-Czechoslovakia, a traveling salesman, a steelworker, a recycling mill worker, and a stagehand. His novels, which include Too Loud a Solitude, Closely Watched Trains, and I Served the King of England, were censored under the Communist regime and have since been translated into nearly thirty languages. He fell to his death from the fifth floor of a Prague hospital, apparently trying to feed the pigeons. The author lives in Czech Republic.

1. Within the first sentence of Harlequin’s Millions we are introduced to the theme of time: “Just outside the little town where my time stood still is a small castle, and in that castle is now a retirement home.” In the second clause of this sentence are juxtaposed the past and present uses of a building, showing a change brought about by time. Nonetheless, in the first clause we are given a location in which time seems to hold no effect: it stands “still.” The wrought-iron clock in the castle, stuck at seven twenty-five, seems to further emphasize this latter idea. In what ways does time seem to have ceased flowing in this novel? What aspects of the narrator’s life, mentality or environment seem immune to the passing of days? And oppositely, how does the movement of time leave traces in the city, the retirement home, and the landscape; in society and mores; and in the narrator and those around her? In chapter 14 the narrator notices “how times had changed” in her “little town where time stood still.” Is this a recognition that her former idea of the immobility of time is false? Or has the narrator simply developed a different sense of her life’s and the world’s temporality? Finally, what is the narrator’s relationship to the distant past – that of the former castle and that of the history of the town as told by the “three witnesses to old times”? How real are these stories she hears and in the end she herself recounts about the past? What effect might either real or fictionalized history have on the present?

2. The narrator often recalls how when young she was the beauty of the town. Now past the threshold of old age, this former beauty of hers has disappeared, leaving her wrinkled and toothless. Yet in a gesture of situational irony, the narrator finds herself at this stage of life in a castle decorated with swirling frescos and sculpted nudes baring perfect bodies. What differences and similarities are there between the fleeting yet human beauty of the narrator in her youth, and the immortal yet impersonal beauty of the statues and the figures represented on the ceiling? What emotions do the frescos and statues instill in the narrator? And how does the narrator’s experience with the paintings and statues compare to the near bacchic frenzy inspired by Doctor Holoubek’s classical music in chapter 10? In chapter 13 the narrator discovers that many of the statues were damaged in drunken bouts of shooting, their missing body parts later replaced by cement. Though the narrator claims she first was “shocked” at learning this, she then states that because of their imperfections these statues “seemed even more beautiful to me than before.” What is the relationship in this novel between beauty and perfection, or between beauty and vulnerability? Aside from the castle and its decorations, is there a certain beauty to this retirement home, where mortality is set in relief?

3. The lives of the narrator and her husband seem punctuated by failed plans and unaccomplished dreams. The narrator’s store in Prague closes down in a pile of debt, the husband discovers he is unable to withdraw from his life insurance investment, both of their comfortable lives in the brewery are brought to a close by the new regime, their new house on the river is poorly designed and shaken by a malevolent wind. What forces cause these dreams to remain unfulfilled? Are these failures tragically outside the control of the narrator and her husband, or are they brought about by a lack of foresight and intelligence? How do these hopes become extinguished or continue to survive once the narrator and Francin are in the retirement home? In the very last chapter the narrator states that after her first visit she “dreamed of the retirement home” and “wanted more than anything to live there.” However, her “true story” is that she left the brewery and moved into her windy and desolate “villa on the Elbe.” How much of the narrator’s relation of her stay in the retirement home is only the creation of a dream? What is this connection between unfulfilled desires and the fabrication of fiction?

4. The “soft melody of Harlequin’s Millions” drifts constantly through the air of the old castle turned retirement home. What effect does this song have upon the pensioners and the narrators? What might the fact that it originates from the romantic scenes of silent movies say about its role in the novel? Is the sweetness of the music simply a pleasant background accompaniment, or is it in some way creating a false atmosphere of happiness – or is it perhaps doing something else entirely? One might also compare this ubiquitous tune to the dangerous power of Doctor Holoubek’s classical music. Why might Hrabal have chosen to name the novel after this song? The narrator furthermore describes how the pensioners immediately become anxious when one of the rediffusion boxes turns off, even though they otherwise do not seem to notice the presence of this song. What else is there in this novel, and perhaps in our own lives, of which only the cessation draws attention?