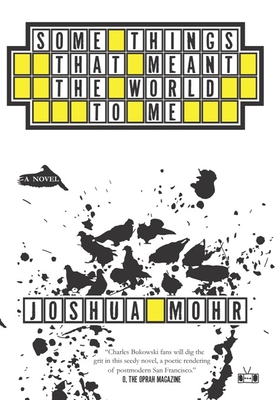 Some Things That Meant the World to Me

#8 of 10 Terrific Reads of 2009. "Charles Bukowski will dig the grit in this seedy novel, a poetic rendering of postmodern San Francisco." -O, The Oprah Magazine

A Best Book of the Year -The Nervous Breakdown

"Where Michel Gondry would go if he went down a few too many miles of bad desert road." -The Collagist

"Mohr's prose roams with chimerical liquidity. The magic of this book is a disturbing, hallucinogenic magic." -Boston's Weekly Dig

Following a 30-year-old man named Rhonda suffering from depersonalization, Some Things That Meant the World to Me is a gritty and beautiful work that is creative and hypnotic, and should stand as an introduction of an original new voice to American literature.

When Rhonda was a child -- abandoned and ignored by his mother; abused and misguided by his mother's boyfriend -- he imagined the rooms of his home drifting apart from one another like separating continents. Years later, after an embarassing episode as an adult, Rhonda's inner-child appears, leading him to a trapdoor in the bottom of a dumpster behind a taqueria that will force him to finally confront his troubled past.

In the spirit of Cruddy and Hairstyles of the Damned, Joshua Mohr has created a remarkable and unforgettable character in this charmingly poetic and maturely crafted first novel.

Joshua Mohr has been published in Other Voices, The Cimarron Review, Pleiades, and Gulf Coast, among others. He lives in San Francisco and teaches at a halfway house.

Joshua Mohr has been published in Other Voices, The Cimarron Review, Pleiades, and Gulf Coast, among others. He sings in the band Damn Handsome & The Birthday Suits.
or
Not Currently Available for Direct Purchase