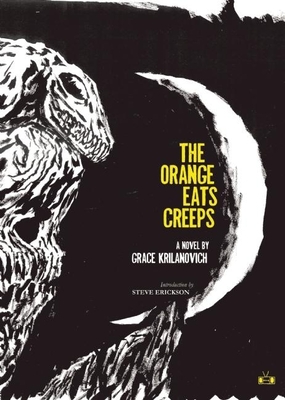 "The book feels written in a fever; it is breathless, scary, and like nothing I've ever read before. Krilanovich's work will make you believe that new ways of storytelling are still emerging from the margins."
--NPR

A girl with drug-induced ESP and an eerie connection to Patty Reed (a young member of the Donner Party who credited her survival to her relationship with a hidden wooden doll), searches for her disappeared foster sister along "The Highway That Eats People," stalked by a conflation of Twin Peaks' "Bob" and the Green River Killer, known as Dactyl.


Praise For The Orange Eats Creeps…

"Grace Krilanovich's first book is a steamy cesspool of language that stews psychoneurosis and viscera into a horrific new organismthe sort of muck in which Burroughs, Bataille, and Kathy Acker loved to writhe."The Believer

"Krilanovich's work will make you believe that new ways of storytelling are still emerging from the margins."—NPR.org

"The Orange Eats Creeps contains the hallucinatory, disjointed, plotless, yet bizarrely charming ravings of a young refugee from foster care who now belongs to a pack of teenage hobo vampires that rove convenience stores and supermarkets high on Robitussin and mop buckets of coffee."—Newsday

Grace Krilanovich (Author) is a graduate of the California Institute of the Arts, where she received her MFA. She has been a finalist for the Starcherone Prize, has been nominated for a Pushcart Prize, published in Black Clock, and a fellow of the MacDowell Colony. Her first book, The Orange Eats Creeps was an instant cult classic upon its release in 2010.Steve Erickson (Introduction) is the author of eight novels: Days Between Stations (1985), Rubicon Beach (1986), Tours of the Black Clock (1989), Arc d'X (1993), Amnesiascope (1996), The Sea Came in at Midnight (1999), Our Ecstatic Days (2005) and Zeroville (2007).
Loading...
or support indie stores by buying on