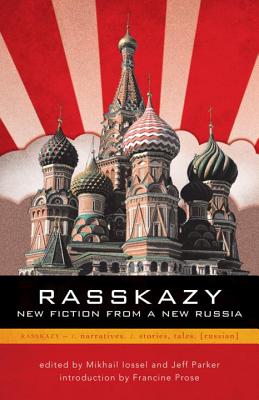 New Fiction from a New Russia

Featuring some of Russia's most prestigious post-Soviet writers, Rasskazy: New Fiction from a New Russia portrays the range of aesthetics and subject matter faced by a generation that never knew Communism.

Few countries have undergone more radical transformations than Russia has since the fall of the Soviet Union. The stories in Rasskazy: New Fiction from a New Russia present twenty-two depictions of the new Russia from its most talented young writers. Selected from the pages of the top Russian literary magazines and written by winners of the most prestigious literary awards, most of these stories appear here in English for the first time.


Praise For Rasskazy: New Fiction from a New Russia…

Tin House has done the world a service in its release of Rasskazy: New Fiction from a New Russia...Think of these stories (or rasskazy) as the final frontier.”Willamette Week

"The current state of Russian identityartistic, political, social and beyondis vigorously examined in this anthology, offering readers a multifaceted portrait of the complex nation, from short, poetic pieces like Oleg Zobern's 'Bregovich's Sixth Journey,' to nearly journalistic narratives like Arkady Babchenko's powerful and harrowing remembrance of the Chechen war ('The Diesel Stop'). The dreams and fears of young and old are includedRoman Senchin's 'History' follows a retired and politically indifferent professor who gets caught up in a mass arrest of protesters and subsequently must wake up to the oppressive realities of his country, and Anna Starobinet's 'Rules' is a whimsical and poignant sketch of a frighteningly perceptive boy. The editors point out that the stories 'fall broadly into the category of what can be referred to as New Russian Realism.' This realism, though, leaves plenty of room for surreal and dryly humorous perspectives (such as Kirill Ryabov's 'Spit' and Vadim Kalinin's 'The Unbelievable and Tragic Story of Misha Shtrikov and His Cruel Wife'). This is a truly diverse series of revelations."Publishers Weekly

"...raw, intense and sure to leave an impression."Douglas Smith, The Seattle Times

Rasskazy presents not only the future of Russian writing but also the future of literature, that hopelessly human project.”
Aleksandar Hemon, author of Love and Obstacles

Rasskazy is a marvelous collection that gives an American reader a taste of the diversity of literary voices as well as the richness of post-Soviet Russian life.”
Lara Vapnyar, author of Broccoli and Other Tales of Food and Love

"A collection of first-rate stories like Rasskazy: New Fiction from a New Russia provides not only a much-needed renovation of our understanding of Russia's present, but also a glimpse into the world's future: a future featuring an exponential increase in sorrow and terror and corruption, endless premonitions of menace, and our main source of hope residing in the resilient capacities of human tenderness." Jim Shepard, author of Like You'd Understand Anyway

"The stories in Rasskazy: New Fiction from a New Russia...aptly illustrate this unbroken continuum of Russian literature dating back as far as Pushkin, Dostoevsky, and Tolstoy, etc. etc...their work demonstrates the full breadth of aesthetics and topical concerns of this young generation."Kevin Kinsella, TheRumpus.net

..."Rasskazy stands to remind us that Russia is a country still putting out vital literaturedespite the memory of censorship that creeps into its writing."Jason Diamonds, Vol. 1 Brooklyn

"It is a triumph that Rasskazy: New Fiction from a New Russia is one of those very few new translations surfacing in bookstores, because the voices in this collection are fresh and vital."The Collagist

"These young authors are clearly aware of the literary lineage to which they are eternally rooted. Yet ultimately they know their prose must grow beyond such lineages in order to articulate a distinct and alternate future: new fiction for a new Russia."The McGill Daily

"...these stories are about alienation and displacement...at least some Russians are still readingnot only themselves but their classicsas they write themselves out of cultural amnesia." Maxim D. Shrayer, The Globe and Mail

'Rasskazy...is rich with detail and hard-edged beauty. It is full of brutality and the poignancy of living through hard times. This collection should enable this crop of modern authors to step out of the literary shadows. It's time for their turn in the sun." Katie Schneider, The Oregonian

"Many old comrades reside here: loneliness, treachery, cruelty, melancholy, memories of disaster and departure, conveyed in heartrending tones by as talented a cohort of authors as to be found anywhere. This splendid collection of twenty-two Russians, none of whom had reached maturity when the Soviet Union collapsed, their work varied, so full of memorable situations, beckons the adventurous reader."Dalkey Archive Press's Review of Contemporary Fiction

"These tales of love and loss and change and redemption are peculiarly affecting. They achieve what any good short story writer should aspire to: plumbing the depths of human emotions in only a few short pages." Popmatters.com

"Many old comrades reside here: loneliness, treachery, cruelty, melancholy, memories of disaster and departure, conveyed in heartrending tones by as talented a cohort of authors as to be found anywhere."Dalkey Archive Press's Review of Contemporary Fiction

Mikhail Lossel was born in Leningrad, USSR, where he belonged to a circle of underground (“samizdat”) writers. He immigrated to the United States in 1986 and is currently the coordinator of the creative writing program of Concordia University in Montreal, Canada. The author of Every Hunter Wants to Know (W.W. Norton), a collection of stories, and coeditor of Amerika: Russian Writers View the United States (Dalkey Archive), his fiction has been translated into several languages and anthologized in The Best American Short Stories and elsewhere. He has received fellowships from the NEA, the Guggenheim Foundation, and Stanford University. In 1998 he founded Summer Literary Seminars, Inc.—one of the world’s largest international literary conferences: www.sumlitsem.org.

Jeff Parker is the author of the novel Ovenman and the collection The Back of the Line and the coeditor of Amerika: Russian Writers View the United States. He served as the program director of Summer Literary Seminars in St. Petersburg, Russia, and is currently the acting director of the Master’s Program in the Field of Creative Writing at the University of Toronto.
Loading...
or
Not Currently Available for Direct Purchase