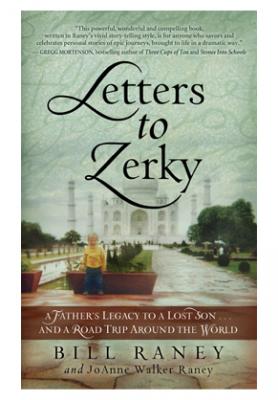 Finalist for the Eric Hoffer AwardIPPYAward Gold Medalist for TravelEssayNext Generation Indie Book Award Winner for General Non-FictionNext Generation Indie Book Award Finalist for Travel/Travel GuideBoth a memoir and a memorial, these collected letters and diary entries recount one family's adventurous journey in 1967 attempting to drive around the world in a VW bus. Not intended as a book at the time of the writing, the intimate and poignant story details the family's travels through Europe, the Middle East, and into Asia, challenging preconceptions about different cultures and illuminating how one-year-old Zerky had a magical effect on everyone they met along the way. The book features maps and pictures of the trek yet is more than just a travelogue; Zerky and his mother died shortly after the trip and this narrative serves as tribute to their lives.

Bill Raney dropped out of college in 1959 to become a beatnik in San Francisco s North Beach district. In the late 1960s, he founded the Nickelodeon Theatre, a local art theatre still alive and successful today. He lives in Santa Cruz, California. JoAnne Walker Raney moved to Paris in 1955 and from there went hitchhiking through Yugoslavia during the 1956 Hungarian Uprising. She returned to San Francisco in the late 1950s to buy and remodel a small art theatre, The Movie. She died in 1969."

Praise For Letters to Zerky: A Father's Legacy to a Lost Son and a Road Trip Around the World…

"This powerful, wonderful and compelling book . . . is for anyone who savors and celebrates personal stories of epic journeys, vividly brought to life in a dramatic way."  Greg Mortenson, author, Three Cups of Tea

Bill, JoAnne, their 18-month old son Zerky and their fearless dachshund Tarzan packed into their VW van to set-off to see the world. Iran, Pakistan, Afghanistan, India, Sikkim, Assam, Nepal, Thailand, China. Bill takes you along on that rugged ride. Letters to Zerky captures those innocent times in this touching blast to the past and tender tribute to a son.”  Brandon Wilson, Lowell Thomas Award-Winning author of Along the Templar Trail and Yak Butter Blues

A masterful storyteller and beautiful description. A tale that keeps readers turning the page for more. The book will appeal to a wide audience, including those interested in travel, Middle Eastern history, and simply a well-written story of adventure.”  Christine Canfield, ForeWord Magazine

That rare travelogue with no ego and a true sense of discovery. A compelling and poignant read. The glimpses into Afghanistan, Pakistan, India, Nepal and China are invaluable.”  Kyle Wagner, The Denver Post