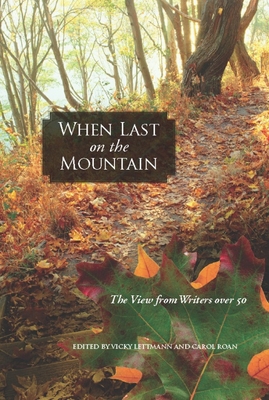 When Last on the Mountain (Paperback)

The View from Writers Over 50

"When Last on the Mountain is an open look at the many and astonishing ways our bodies bear both curses and blessing and is a testament to our abiding need to address in language and image the body's sure and swift betrayals. From a vantage point of life after fifty, with grace and humor these writers peer soberly at the future while maintaining their gaze on the past."--Gina Ochsner, author of The Russian Dreambook of Color and Flight "A fun and varied read. Insightful, witty, and sometimes heartbreaking selections, but all with an underlying fire for life."--Will Weaver, author of Sweet Land: New & Selected Stories "Who better to bear witness to the slings and arrows of outrageous fortune than writers over 50? The voices of experience collected by Lettmann and Roan are generous in their honest specificity. Prospective readers can be assured of a good and meaningful time with these stories, essays and poems."--Sam Hodges, reporter for The Dallas Morning News and author of B-Four "When Last on the Mountain is a book full of treasures. From these writers comes work of substance, surprise, and death-defying candor. To read these pieces is to be inside an art that sifts through comedy, irony, and hard facts to offer the intensely interesting (yes) exhilarations of the long view."--Joan Silber, author of Ideas of Heaven: A Ring of Stories and The Size of the World "One day I will write my last downhill run, not on snow, but on paper. Not today. No. I dance, stop, dance, stop, dance, dance, dance down the mountain."--Kaye Bache-Snyder What sets these writers apart? Until we reach fifty, how we live and write is colored by our futures: those we expect to have and those we imagine. The perspective of the over-fifty writer takes on the hues of both past and future, tinted by memories of first loves, stained by memories of war and loss, and made more poignant by the knowledge that this spring's blooms or this morning's cup of coffee with a beloved husband may be the last and must be savored fully. These essays, stories, and poems were chosen from more than two thousand submissions of previously unpublished work. Some of the contributors--a poet laureate, a Pulitzer Prize nominee, a former foreign correspondent--have long literary histories; others--a social worker, a civil service employee, a clergywoman--began to write later in life. All of them were inspired by a call that asked for fresh and honest writing from the fullness of their lives. Vicky Lettmann, who writes fiction, essays, and poetry, served as an editor for the literary/arts magazines Speakeasy (the Loft Literary Center) and Under Construction (North Hennepin Community College). She received an MFA in fiction writing from Warren Wilson College. Her work has appeared in Twenty-Six Minnesota Writers (Nodin Press) and in Beloved on the Earth: 150 Poems of Grief and Gratitude (Holy Cow Press). Carol Roan teaches voice and stage presence in Winston-Salem, North Carolina. She is the author of Clues to American Dance (Starrhill Press) and Speak Easy: A Guide to Successful Performances, Presentations, Speeches, and Lectures (Starrhill Press), and she writes a column on the "art of performance" for an online 'zine. She won a fellowship to Summer Literary Seminars, Russia, in 2006.

Editor Vicky Lettmann, who writes fiction, essays, and poetry, served as an editor for the literary/arts magazines Speakeasy (the Loft) and Under Construction (North Hennepin Community College). She received an MFA in fiction writing from Warren Wilson College. Her work has appeared in Twenty-six Minnesota Writers and in Beloved on the Earth: 150 Poems of Grief and Gratitude. Editor Carol Roan teaches voice and stage presence in Winston-Salem, North Carolina. She is the author of Clues to American Dance (Starrhill Press, 1993) and Speak Easy: A Guide to Successful Performances, Presentations, Speeches, and Lectures (Starrhill Press, 1995) and writes a column on "The Art of Performance" for an online zine.

Praise For When Last on the Mountain: The View from Writers Over 50…

"Whether you’re 16 or 60 years old, you’ll be enchanted by When Last on the Mountain: The View from Writers over 50, poems, essays, and stories edited by Vicky Lettmann and Carol RoanUnlike young writers who fuel their talent with hopeful dreams of the future, the 69 contributors write with a conviction that is grounded in a reality both heartwarming and heart-wrenching. From a poet laureate and Pulitzer Prize nominee to a social worker and a clergywoman, the authors have been shaped by the lives they’ve led."Chantel O'Neal, Winston-Salem Monthly

"Aging is depicted in all its vibrancy, poignancy, difficulty and even hilarity in a new anthology by writers in their 50s through 90s. The just-published anthology, When Last on the Mountain: The View from Writers over 50, disproves the cliché of being over the hill at 50. Instead of that old chestnut, the essays, fiction, and poetry offer unique and encouraging views of aging."Marsha Dubrow, from Examiner.com (Washington, DC)

"A mix that includes work by celebrated and previously unknown writers tackling rather predictable broad themes, including family memories, the passage of time and the close of life. The brave self-acceptance that the editors admire leads the best of these writers to take that very predictability and contrast it with surprising details and resilient attitudes that raise their writings out of the ordinary."Rosemary Herbert, Star-Tribune

"I was impressed beyond expression by the anthology’s opening line from Judith Serin’s essay 'Sharing a Room with Your Sister:' 'You don't remember anything about this; it's all stories.' Another of those utterly perfect beginnings, the anthology's clear strength and most appealing component. Isn't this precisely how, on some level, we will all end up summing up our lives: it's all stories."Sima Rabinowitz, Newpages.com

"In When Last on the Mountain, readers can have it all. This anthology speaks to the full range of human experience with many voices, all of them having only one thing in common: the writers have lived a significant measure of years on this earthat least fiftyand know how to offer up their lives with honesty, humor, courage and grace. Who are these writers? In the editors' preface, we learn that 'older writers sent us 2,100 submissions from across the country, from Qatar and Canada, from Mexico and Israel, from Switzerland, England, Japan, Australia, and a small island in the Pacific.' These writers are not just in their fifties, but cover the full spectrum of the wisdom years, ranging all the way into the nineties."Maril Crabtree, The Best Times