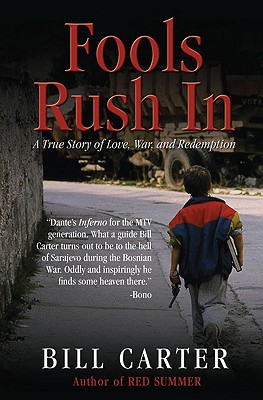 A True Story of Love, War, and Redemption

Offering an in-depth personal account of the Bosnian and Herzegovinian war, this autobiography follows the author as he departed for conflict-ridden Eastern Europe in the early 1990s. Demonstrating how the protagonist discovered his own love of humanity, this narrative documents his career as an aid-worker, toiling amidst a motley crew of expatriate punk rockers and thrill junkies who dressed as clowns to deliver food to bombed-out orphanages. Touching on his later role as a dogged emissary, this chronicle also relates how the author convinced the rock group U2 to help bring the siege of Sarajevo to the planet via satellite broadcasts beamed out during their PopMart world tour. A forthright and powerful memoir, this searing reconstruction depicts an innocent city under attack as well as indelible portraits of the people of Sarajevo, who continued to live their lives with hope, humor, and passion. This updated edition also includes an introduction by Charles Bowden, the author of Down by the River.


Praise For Fools Rush In: A True Story of Love, War, and Redemption…

"Dante’s Inferno for the MTV generation. What a guide Bill Carter turns out to be to the hell of Sarajevo during the Bosnian War. Oddly, and insipiringly, he finds some heaven there."  —Bono, lead singer, U2

"After reading Fools Rush In, you may find yourselves giving much greater consideration to what in life is important and what is merely trivial."  ––Jon Krakauer, author, Into the Wild and Where Men Win Glory: The Odyssey of Pat Tillman

"A totally admirable book, the memoir of a young man written out of necessity, the only true reason to write a book . . . its consciousness will become part of your life."  —Jim Harrison, author, Legends of the Fall and True North

"I can't claim to know what life is about but I know if my life does not entail helping other people, then it is not much of a life at all. I keep a copy of this book near at hand for those moments when I seem to forget who I am. And it helps, every time."  —Charles Bowden, author, Down by the River

Bill Carter is a former commercial fisherman and an award-winning documentary filmmaker and photographer. He has written for Men’s Journal, Outside, Rolling Stone, and Spin. His documentary film, Miss Sarajevo, was awarded the International Monitor Award, the Golden Hugo Award, and the Maverick Director Award. He lives in Bisbee, Arizona.