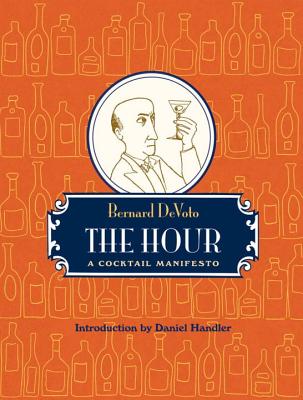 “Dorothy Parker's stern eye mixed with the sass of Mark Twain, and a jigger of Christopher Hitchens thrown in for good, boozy measure.” —The Atlantic

One part celebration, one part history, two parts manifesto, Bernard DeVoto’s The Hour is a comic and unequivocal treatise on how and why we drink—properly. The Pulitzer Prize and National Book Award–winning author turns his shrewd wit on the spirits and attitudes of his time (warning: this book is NOT for rum drinkers), and instructs readers on how to drink with class while shedding new light on the simple joys of the cocktail hour. An immediate classic, and perfect gift for the modern drinker, Wallace Stegner called it “a manual of witchcraft, a book of spells and observances” and Lewis Lapham hailed it as “generous, indomitable and wise.” With a wonderful introduction from Daniel Handler, this fully illustrated reprint of the 1950s definitive drinking guide provides a humorous and nostalgic read guaranteed to lift your spirits.


Praise For The Hour: A Cocktail Manifesto…

The Hour is not simply a piece of humorous cultural patriotism either. It is a manual of witchcraft, a book of spells and observances.

If in the well and truly made martini DeVoto finds "water of life" and the blessing to the spirit, so also DeVoto's The Hour brings to its readers the breath of life and a vision of themselves made generous, indomitable and wise.

In an age when all that was old seems to be new again, Bernard DeVoto’s The Hour couldn’t have made a more timely reappearance. This book reminds me of one of the joys of being an adult—cocktail hour!

The Hour has long been regarded as a classic . . . Strait is the gate and narrow is the way to Mr. DeVoto's magic cocktail kingdom.

DeVoto insists in delightfully snooty language that there are only two cocktails, the slug of whisky and the perfectly-measured martini.
— The New Yorker

In terms of the cult of happy hour, this may be the best tome ever written, and if you like to shake and stir at all, it is an essential volume to keep on your bar cart.
— the Daily Beast

The Hour is a celebration of good plain bourbon and rye, and of the martini, America's gifts to the world.

Pride of place goes to a reissue of The Hour: A Cocktail Manifesto, righteously written by the critic, Twain scholar, and eminent historian Bernard DeVoto. First published in 1948, The Hour is meant to be savored in one wing-chair sitting.

Immensely quotable, curmudgeonly but smart—think Dorothy Parker's stern eye mixed with the sass of Mark Twain, and a jigger of Christopher Hitchens thrown in for good, boozy measure.
— the Atlantic

Bernard DeVoto was an author, literary critic, and historian. In 1948, he won the Pulitzer Prize for Across the Wide Missouri, and in 1953 he won the National Book Award for The Course of Empire. From 1935 onward he wrote a regular column, The Easy Chair, for Harper's Magazine. He served as curator for the papers of Mark Twain, and gained popularity for his abridged version of the journals of Lewis and Clark. He was a champion of public lands and the conservation of natural resources, as well as an adamant defender of civil liberties.
Loading...
or support indie stores by buying on