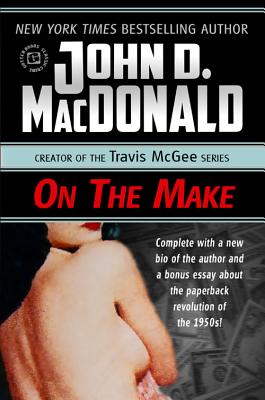 Tal Howard, a disillusioned Korean War veteran, breaks away from his old life, looking for answers. He's convinced he's going to find them in the small town of Hillston, the location of 60 grand in embezzled funds that Howard learned about from a dying friend in a POW camp. He just needs to find out where the money is hidden and contend with another former POW who has come looking for it--Earl Fitzmartin, a psychopath of whom they were all terrified in the camp. Howard soon learns that the secret to the money's location lies in the dead man's past, which must be discovered through the women he knew, such as the respectable Ruth Stamm and the sultry and dangerous Toni Rassele. Now featuring a new biography of John D. MacDonald and an essay exploring the paperback revolution of the mid-20th century, this early novel by a crime writing legend features classic hard-boiled writing, brutal action, tough characters, and a plot in which no one is spared.

Praise For On the Make…

"[John D. MacDonald was] the great entertainer of our age, and a mesmerizing storyteller."  —Stephen King

"My favorite novelist of all time."  —Dean Koontz

“To diggers a thousand years from now, the works of John D. MacDonald would be a treasure on the order of the tomb of Tutankhamen.”  —Kurt Vonnegut

John D. MacDonald is considered by many to be the premier pulp novelist of the 1950s and '60s. He is the author of "The Executioners, " which has been made into two Hollywood blockbusters as "Cape Fear," as well as the Travis McGee mystery series, one of the best-loved fiction sagas of all time.
Loading...
or support indie stores by buying on