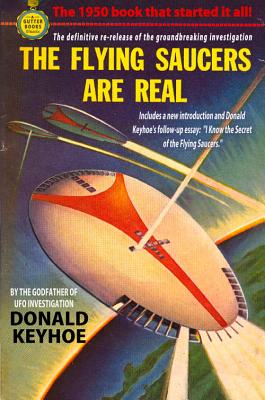 The Flying Saucers Are Real

Presented for a new generation, this thrilling reprint of the very first book-length investigation into the UFO phenomenon follows in the pulp tradition of the original 1950 pressing, which sold more than half a million copies. Rumored to be the inspiration for the character of Fox Mulder of The X-Files, leading ufologist Donald Keyhoe delivers the results of his groundbreaking research in a style that is at once terse and businesslike, imbued with a sense of wonder at the mysteries and possibilities he is confronting. Keyhoe argues that aliens—whatever their origins or intentions—do not seem hostile and have likely been surveilling the Earth for 200 years or more, though Keyhoe writes that their "observation suddenly increased in 1947, following the series of A-bomb explosions in 1945." This stunning work of nonfiction touched off everything we associate with the UFO phenomenon today—the widespread paranoia, the government disinformation campaigns, and the inevitable conclusion, for many people the world over, that UFOs exist and do not have an Earthly origin.

Donald Keyhoe was an American Marine Corps naval aviator, writer of many aviation articles and stories in a variety of leading publications, and manager of the promotional tours of aviation pioneers, especially of Charles Lindbergh. He became well-known as a UFO investigator, and was widely regarded as the leader in the field of ufology in the 1950s and '60s.
Loading...
or
Not Currently Available for Direct Purchase