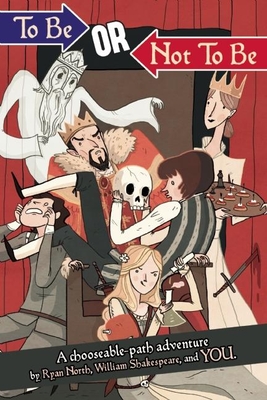 To Be or Not to Be

To Be or Not To Be is a choose-your-own-path version of Hamlet by New York Times best-selling author Ryan North. Play as Hamlet, Ophelia, or King Hamlet--if you want to die on the first page and play as a ghost. It's pretty awesome Readers can follow Yorick skull markers to stick closely to Shakespeare's plot, or go off-script and explore alternative possibilities filled with puzzles and humor. Each ending in the book is accompanied by a full-color, full-page illustration by one of the 65 most excellent artists working today, so each rereading yields new surprises and rewards. Ryan's prose is, as always, colloquial and familiar but full of clever references, vivid imagination, and only the most choice of jokes. Inventive devices like a book-within-a-book (to mirror Hamlet's play-within-a-play) take full advantage of the gamebook medium and liven up the original story for even the most disinterested of Shakespeare readers To Be or Not to Be became a sensation when it launched: over 15,000 people backed the book in just one month, and it remains the number-one most funded publishing project ever on Kickstarter.com. To be, or not to be: that is the adventure

Praise For To Be or Not to Be…

"The Bard would not protest too much, wethinks." CBC

Ryan North is the writer behind the super-funny webcomic Dinosaur Comics, the critically acclaimed and Eisner-nominated Adventure Timecomic, and the coeditor of insanely popular self-published Machine of Death, which became Amazon.com's number-one best-selling book on the day it launched. A sequel, This Is How You Die, will be released in July 2013 from Grand Central Publishing. North lives in Toronto.
Loading...
or
Not Currently Available for Direct Purchase