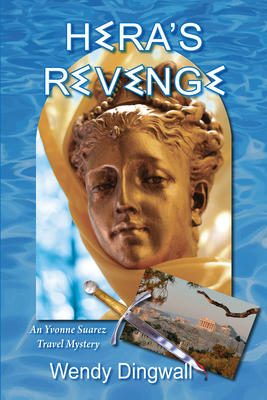 When an airport employee turns up dead in baggage claim upon their arrival in Athens, the Pinkerton Travel Group gets off to a rocky start. How far will travel agent, Yvonne Suarez go to keep her travel clients safe, and her tour on track? David Ludlow needs a vacation from his stressful job, and this itinerary to the land of mythology, Greek philosophers and early democrats was just the ticket to a leisurely escape, until grumpy passengers, missing museum art, and deathly accidents plagued their journey. Will Yvonne's fear of losing control stand in the way of solving these crimes? Who among her travel companions can she trust? Is David using Yvonne and her tour to solve his own dangerous mystery? Find the answers to these questions in the first novel in the new Yvonne Suarez Travel Mystery series.

Former travel agency owner, and former sales manager for a regional publishing house, Dingwall opened her own publishing company, Canterbury House Publishing, in July 2009. She is the Immediate Past President of Florida Gulf Coast Sisters in Crime, a past president and member of the High Country Writers of North Carolina since 2002, a member of Mystery Writers of America, Independent Book Publishers Association, Florida Writers Association and Florida Authors and Publishers. Her first novel Hera's Revenge: An Yvonne Suarez Travel Mystery, released in April 2011, was touted as "a series to watch" by Library Journal. Celtic Curse released in May 2013 is her second novel in the series. She continues as publisher of CHP, publishing books by various southern authors and her third novel, Toxic Cruise, was released in October, 2016.
or support indie stores by buying on