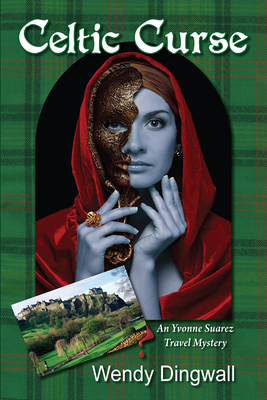 Fiona Batson shares with employer Janice Armstrong her compelling need to return to her childhood home in Peebles, Scotland. Thirty-nine years earlier, her sixteen year old brother Duncan vanished, and Fiona can only bring closure by searching for the clues that led to Duncan's disappearance. Janice refers the fifty-five year old housekeeper to Yvonne Suarez, a travel agent who thwarted an international art theft ring, recovered the golden statue of Hera, and saved Janice's life a year earlier on a trip to Greece.

Former travel agency owner, and former sales manager for a regional publishing house, Dingwall opened her own publishing company, Canterbury House Publishing, in July 2009. She is the Immediate Past President of Florida Gulf Coast Sisters in Crime, a past president and member of the High Country Writers of North Carolina since 2002, a member of Mystery Writers of America, Independent Book Publishers Association, Florida Writers Association and Florida Authors and Publishers. Her first novel Hera's Revenge: An Yvonne Suarez Travel Mystery, released in April 2011, was touted as "a series to watch" by Library Journal. Celtic Curse released in May 2013 is her second novel in the series. She continues as publisher of CHP, publishing books by various southern authors and her third novel, Toxic Cruise, was released in October, 2016.
or support indie stores by buying on