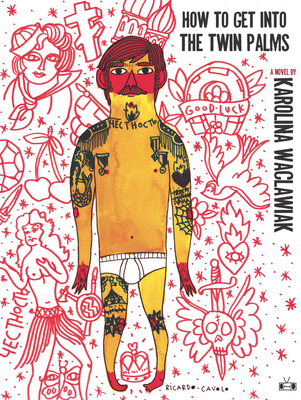 How to Get Into the Twin Palms

* One of the Best Books of 2012 --Salon
"Waclawiak's novel reinvents the immigration story. How to Get Into the Twin Palms movingly portrays a protagonist intent on both creating and destroying herself, on burning brightly even as she goes up in smoke." --New York Times Book Review, Editors' Choice

How To Get Into the Twin Palms is the story of Anya, a young woman living in a Russian neighborhood in Los Angeles, who struggles between retaining her parents' Polish culture and trying to assimilate into her adopted community. She lusts after Lev, a Russian man who frequents the Twin Palms nightclub down the block from Anya's apartment. It is Anya's wish to gain entrance to this seeminly exclusive club. How To Get Into the Twin Palms is a really funny and often moving book that provides a unique twist on the immigrant story, and provides a credible portrait of the city of Los Angeles, literally burning to the ground.

Karolina Waclawiak is the author of the critically acclaimed novels How to Get Into the Twin Palms and THE INVADERS. AWOL, a feature she co-wrote with Deb Shoval, premiered at the 2016 Tribeca Film Festival. Formerly an editor at the Believer, she is now the Executive Editor, Culture at BuzzFeed News. Karolina received her BFA in Screenwriting from USC and her MFA in Fiction from Columbia University. Her writing has appeared in the New York Times, Los Angeles Times, VQR, the Believer, Hazlitt, and other publications.
Loading...
or
Not Currently Available for Direct Purchase