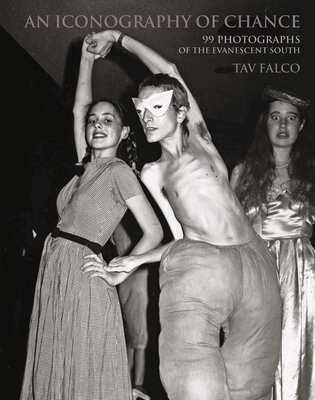 An Iconography of Chance

99 Photographs of the Evanescent South

Countercultural musician, performer, filmmaker, and photographer Tav Falco was born and raised in the American South. In An Iconography of Chance, Falco guides us through the hometowns and gravel roads of this region and introduces us to the backwoods spiritual sanctuary that he knows so well.

This limited edition book offers nearly one hundred arresting photographs of roadside icons in Arkansas, Louisiana, Mississippi, and Tennessee. Falco’s eye is drawn to that which others have overlooked, discarded, and rejected. Whether overtly or discreetly conjured, through his lens, these forlorn and adrift items—urban specters, rural fables, and visual clichés—become living, breathing images that agitate the dark waters of the unconscious. In Falco’s hands, the camera captures the very heart of the gothic South, a netherworld of dreams—and terrors.

This multilingual book, which accompanies a traveling exhibition by the Ogden Museum of Southern Art and Music in New Orleans, will appeal to readers of English, Spanish, French, or German. Including a prologue by renowned photographer Alberto Garcia-Alix, An Iconography of Chance offers a magnetic portrait of a place as fascinating as it is disturbing.

Praise For An Iconography of Chance: 99 Photographs of the Evanescent South…

“The heat, dust, country roads, old cars, gas stations, and diners in the middle of nowhere—Falco restores the meaning that these anchors of life, many of which have already vanished, once possessed in the American South.”
— Der Standard

“An Iconography of Chance is all about Tav Falco keeping his promise: a book about crossroad meetings, a mixture of glory and defeat, an exotic guide to the Deep South. Tav Falco is an explosive cocktail for those heading to the asylum: Proust kills Faulkner, Mozart reincarnates in Jerry Lee Lewis, Freud understands Robert D. Lee, the Danube meets the Mississippi. All is gone in the wind like a bunch of tumbleweed, drunk and disorderly. Tav Falco embodies the free spirit of someone who has nothing to lose. Forever on the move, forever in exile, forever lucid.”

“Exactly in the Indeterminable lies the secret of Tav Falco’s photographs of the disappearing South. What they hint at—the underlying terror, absurdity, and humor of the American experiment—is as important as what they portray. Falco lures the spectator, the viewer, into a kind of truth that is the enemy of the merely factual.”
— Richard Pleuger, author of How Movies Are Made

Tav Falco is the leader of the psychedelic rock and roll group Tav Falco’s Panther Burns. He currently resides in Vienna.
Loading...
or
Not Currently Available for Direct Purchase