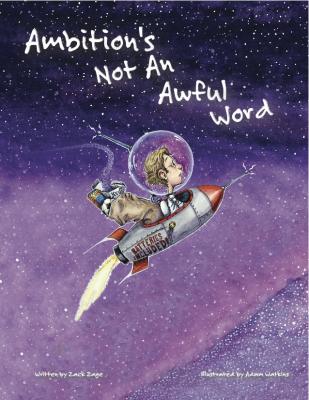 Ambition's Not An Awful Word

When Mrs. Grundy asks her fourth grade class what they want to be when they grow up, Zack Zage goes all out. To his dismay, his precocious dreams are met with less than glowing enthusiasm. Children will love this story about an ambitious little kid with big dreams. Ambition’s Not An Awful Word will have you and your kids howling.

The illustrations by Adam Watkins are fabulous. And, the glossary is unforgettably funny. It is a gift to all the parents who have struggled to stay awake while reading a bedtime story to the kids.


Praise For Ambition's Not An Awful Word…

Fourth-grader Zack Zage is fairly busting his buttons, stuck as he is at the end of the alphabet on the day his teacher, Ms. Grundy, introduces the topic, “What I want to be.” Because Zack wants to be a little bit of everything—from cowboy to astronaut to chef, and maybe an architect, artist, doctor, and banker on weekends, to unwind. But as he spins out each of his dreams (in verse, no less), he’s either undone by doubt, by Ms. Grundy, or, in one case, by his stove, which orders him outside to “have a weenie roast” rather than sully it with his cooking. By day’s end he’s defeated and exhausted, and his mother has to remind him it’s both normal and healthy to dream big.

The words and layout work together to make Ambition's Not an Awful Word a success. Illustrator and 2006 Golden Addy Award winner Adam Watkins portrays Zack’s proclaimed fantasy on one page: When Zack wants to be a doctor, he’s shown in an office with cabinets full of toys, drawers full of candy, and a young girl sitting on the exam table while he makes notes on a pad. On the facing page, Zack himself is on the table, clutching his scraped knee to his chest, and the candy has been replaced by the requisite peroxide and cotton balls. In his lawyer reverie, he’s seen standing next to Raymond Burr as Perry Mason, with a cheering citizen in the background; the reality shows him falling off a soapbox, dropping a “Zage for Congress” sign, and looking as if he’s about to be run through by the sword of Lady Justice.

There’s a very funny glossary at the end of the book, described as being “for parents who have struggled to stay awake at night while reading a bedtime story to their children,” but its helpfulness in that circumstance is debatable. If your daughter asks you what “wallow” means, will telling her “Loll about like a pig in slop, cutting unsavory deals under the table” really end the questioning? Ambition aims high, as it should, and, for the most part, succeeds.