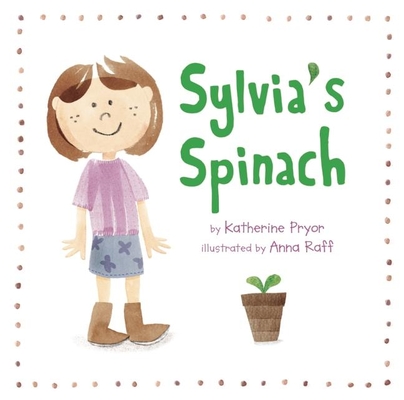 A PICKY EATER DISCOVERS THE JOY OF GROWING FOOD AND THE PLEASURE OF TASTING SOMETHING NEW. Sylvia Spivens always says no to spinach. But one day Sylvia's teacher gives her a packet of spinach seeds to plant for the school garden. Overcoming her initial reluctance and giving the seeds a little love and patience, Sylvia discovers the joy of growing food and the pleasure of tasting something new. Parents will identify with the challenge of feeding healthy food to a picky eater during family dinner. Educators will understand the magic and rewards of school gardens. Best of all, young readers will celebrate Sylvia's strong will, curiosity, and, maybe, her love of spinach. Katherine Pryor made her picture book debut with Sylvia's Spinach, which has been widely used for nutrition education and school garden curriculum. Anna Raff's many children's books include World Rat Day by Children's Poet Laureate, J. Patrick Lewis. Katherine and Anna teamed up for their second book together, Zora's Zucchini, published in 2015. Sylvia's Spinach was named among 15 Books for Future Foodies by Food Tank and is a Whole Kids Foundation Book Club selection for September 2016.

“A young spinach hater becomes a spinach lover after she has to grow her own in a class garden... Raff uses unlined brushwork to give her simple cartoon illustrations a pleasantly freehand, airy look... [Pryor] covers gardening basics in a simple and encouraging way."


"When Sylvia winds up with spinach seeds to plant for her class’s garden, she’s not pleased: she hates the green stuff... Once her spinach finally grows...Sylvia develops a sense of ownership over her spinach and, eventually, a taste for it: ‘I tried it, Mom!’ Sylvia said. ‘It’s good!” Pryor’s lesson about healthy eating and trying new things is delivered with a light touch thanks to Raff’s airy ink washes."


“Sylvia's Spinach reminded me that there's a special, secret ingredient in healthy eating—having fun! With great warmth and humor, this book captures the infectious joy of planting one's first seed.”

—Ian Cheney, director of Truck Farm and co-founder of FoodCorps


“Understanding food production is pivotal in a child’s development of food habits. The more familiar and accessible this information, the easier it becomes for a kid to eat healthy. This groundwork propels movement and change. Sylvia’s Spinach accomplishes this conversation in an approachable, kid-friendly way — from start to finish. A once resistant Sylvia learns the value of growing a garden, and through this hard work an appreciation for vegetables. Exposure is half the battle.”

Katherine Pryor is a good food advocate and made her picture book debut with Sylvia's Spinach, which is now widely used to support nutrition education and school garden curriculum. She has managed a program to bring local and healthy food to Washington State hospitals and is the co-founder of South Park Fresh Starts, which grows vegetable starts for a food bank in Seattle. Visit katherinepryor.com. Anna Raff has illustrated several books for children, including World Rat Day by Children s Poet Laureate, J. Patrick Lewis. Her illustrations have also appeared in many newspapers and magazines, including the New York Times and the Washington Post. Before her career as an illustrator, Anna was a designer at the Metropolitan Museum of Art and several children s book publishers. She lives in New York City. Visit annaraff.com. Katherine and Anna teamed up for a second book, Zora's Zucchini, published in 2015.
Loading...
or
Not Currently Available for Direct Purchase