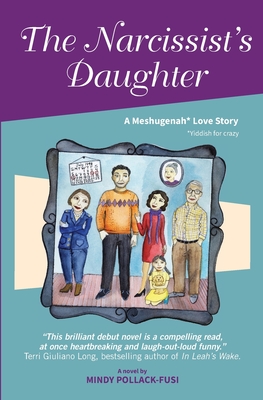 Jody Horowitz grew up in an upscale community outside Boston with her narcissistic mother, her passive father, and her snooty older sister. Breaking any of Mother's multiple rules meant enduring verbal lashings and comparisons to her "perfect" sister. Jody acquiesces in practice, if not in spirit, starting with Rule # 1: Marry a Well-Off Jewish Man. Have his baby. Which she does. But Jody, now 33, with a one-year-old daughter, learns that her "well-off-enough Jewish man" has been screwing a shiksa, and Mother suggests that in order to fix her marriage, Jody "wear more lingerie." Instead, Jody kicks the cheater out, recovers her life with her work, her daughter and their dog....and, despite Rule #1, falls for a kind Italian Catholic widower.

Their love affair leads her to expedite her divorce, despite the risk of losing not only the only family she has ever known, but future shares of the family's fortune. Is this worth it, to be with a partner who has a big heart--but a thin wallet? Her new man seems well worth it, and Jody seems truly happy for the first time in a long time...despite the secret she must keep from him, and the secret she finds out about him.

With her loving Bubbe's support, she resolves to finally emerge from her mother's narcissism--and shatter all rules so she can be true to herself, her daughter, and her new man. This decision unravels her soul and leads to a dramatic personal breakdown that stretches from Boston to California to Maine, which even her best friend Ruthie can't fix for Jody this time. By the start of a highly-charged family reunion, Jody must summon the courage to proclaim her allegiance to her man, not be a pawn to her family, and be a positive role-model for her daughter. To everyone's surprise, a third choice, amid a tumultuous night of secret-revealing, comes to light.

Will Jody remain mired in Mother's manipulation or freed from a lifetime of controlling, narcissistic influences? And how will her young daughter fare from the family mishegas that threatens to consume them? Can love and intimacy guide Jody's exodus, or is the grip of the past too powerful to overcome?

With suspense, humor, romance, a compelling plot, and a Yiddish glossary, this novel grips the reader from start to finish--whether or not they understand the enormous challenges that the daughter of a narcissistic mother must overcome in order to become her own person. Those who do understand, or have lived with a self-absorbed or narcissistic mother, will see themselves in Jody--and cheer her on all the way to her final decision.