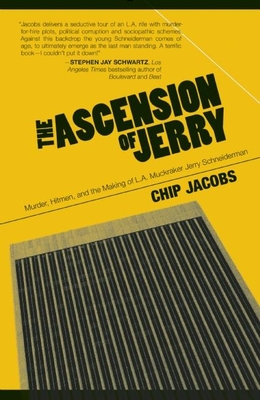 The Ascension of Jerry

Business Lies, Hitmen and the Making of an L.A. Muckraker

Bumbling hitmen. Burning corpses. Life in hiding. A threatened son. Jerry Schneiderman's orderly world evaporated when his business partner was executed by an assassin in 1979 Los Angeles, and the buzzard-eyed ringleader soon came for him. Though the killers behind this murder-for-hire corporation were nabbed, the trauma annihilated Jerry's family and stripped his trust. Recovery only came years later with Jerry's improbable rebirth as a prank-loving activist who defended the weak and made enemies with the rich and powerful.

Chip Jacobs is the author of five other books: Strange As It Seems: the Impossible Life of Gordon Zahler; The Vicodin Thieves: Biopysing L.A.'s Grifters, Gloryhounds and Goliaths; The Ascension of Jerry: Murder, Hitmen and the Making of L.A. Muckraker Jerry Schneiderman; Smogtown: the Lung-Burning History of Pollution in Los Angeles (with William J. Kelly); and the privately issued Black Wednesday Boys. Jacobs' reporting has appeared in the Los Angeles Times, The New York Times, CNN, Bloomberg View, the Daily News of Los AngelesLA Weekly, among other outlets. Jacobs, the recipient of numerous writing commendations, lives in Southern California. Visit chipjacobs.com to learn more.
or
Not Currently Available for Direct Purchase