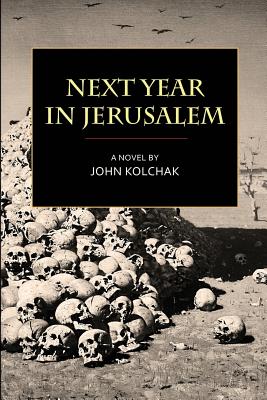 Next Year in Jerusalem

A brutal re-imagining of the Gospel story, Next Year in Jerusalem follows the footsteps of Yeshua Bar-Yosif--an illiterate, epileptic, bastard son of a Roman soldier on his ill-fated life journey through a land racked by terror.

As first century Judea bleeds from the oppression of Roman rule and the violent uprisings against it, Yeshua, tormented by familial guilt for abandoning his mother, eventually forms his own family of travelers who preach for peace and compassion in the face of internecine savagery. Their wanderings lead to encounters with false prophets, assassins, and a rapidly growing movement of extremist rebels whose leader Bar-Abbas' mission is to expel the Romans and establish an ethnocentric theocracy.

Chance sends both Yeshua and Bar-Abbas to the court of Pontius Pilate--the dipsomaniac Governor obsessed with leaving a name for himself in the scrolls of history--and the outcome of that meeting seals the fate of the world for the next two millennia.

With urgent parallels to contemporary issues of religious war, this book is both a lament and a warning. It is also a story about the passage of time, the nature of memory, and of mankind's inherent yearning for life everlasting.

Against this background of violence emerge three figures whose fates collide to change history forever: Pontius Pilate, the dipsomaniac governor of the territory engulfed in endless uprisings; Yeshua Bar-Yosif, an illiterate, epileptic, carpenter's son and reluctant leader of a new religious movement; and Yeshua Bar-Abbas, the ruthless leader of the "Sicarii" - violent insurgents intent on ridding Judea of the occupying Roman army through terror and self-sacrifice.

With prescient historical parallels to the endless wars and conflicts that continue to plague the same part of the world today, this story is both a lament and a warning.

It is also a book about the passage of time, the nature of memory, and of mankind's inherent yearning for life everlasting.