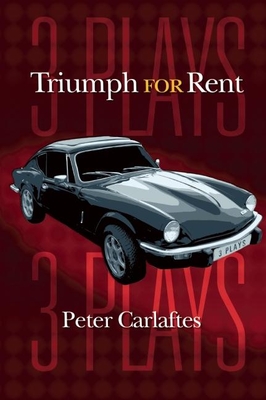 Playwright Peter Carlaftes presents three compelling, funny, and biting dramas in Triumph for Rent: Three Plays. The plays include Spin-Dry: An hilarious wild ride through a 90s rehab center for celebrities; Hunger: a heartfelt drama-inspired by the Knut Hamsun novel-about a starving writer struggling to keep his integrity alive as the borders blur between fantasy and reality worlds of rocker chicks, hookers and convicts; and Frontier A-Go-Go, a tragi-comedy in which a man living on a man living on the Nebraska plains circa 1872 uses a time machine to summon a hippie drifter and a budding feminist who have just conceived a daughter at a rock concert in 1972, and then summons the daughter, aged 25, from her 1997 date with a cybergeek.

Peter Carlaftes is a New York-based screenwriter, playwright, actor, poet, and editor. The author of A Year on Facebook (humor), Drunkyard Dog, I Fold With The Hand I Was Dealt (poetry), and Triumph for Rent (three plays), Carlaftes is also a co-director of Three Rooms Press.
Loading...
or support indie stores by buying on