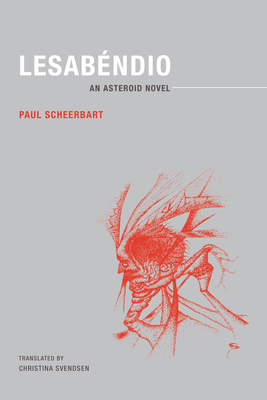 "The serene and gentle amazement with which Scheerbart] tells of the strange natural laws of other worlds . . . makes him one of those humorists who, like Lichtenberg or Jean Paul, seem never to forget that the earth is a heavenly body." --Walter Benjamin

First published in German in 1913 and widely considered to be Paul Scheerbart's masterpiece, Lesab ndio is an intergalactic utopian novel that describes life on the planetoid Pallas, where rubbery suction-footed life forms with telescopic eyes smoke bubble-weed in mushroom meadows under violet skies and green stars. Amid the conveyor-belt highways and lighthouses weaving together the mountains and valleys, a visionary named Lesab ndio hatches a plan to build a 44-mile-high tower and employ architecture to connect the two halves of their double star. A cosmic ecological fable, Scheerbart's novel was admired by such architects as Bruno Taut and Walter Gropius, and such thinkers as Walter Benjamin and Gershom Scholem (whose wedding present to Benjamin was a copy of Lesab ndio). Benjamin had intended to devote the concluding section of his lost manuscript "The True Politician" with a discussion of the positive political possibilities embedded in Scheerbart's "Asteroid Novel." As translator Christina Svendsen writes in her introduction, "Lesab ndio helps us imagine an ecological politics more daring than the conservative politics of preservation, even as it reminds us that we are part of a larger galactic set of interrelationships." This volume includes Alfred Kubin's illustrations from the original German edition.
Paul Scheerbart (1863-1915) was a novelist, playwright, poet, newspaper critic, draftsman, visionary, proponent of glass architecture and would-be inventor of perpetual motion, who wrote fantastical fables and interplanetary satires that were to influence Expressionist authors and the German Dada movement, and which helped found German science fiction.