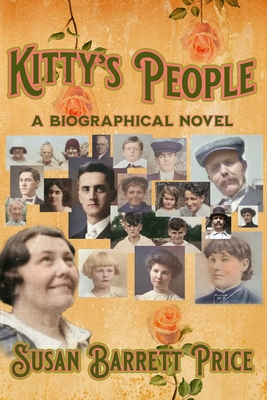 The Irish Family Saga about the Rise of a Generous Woman

EVERY FAMILY NEEDS A LEGEND. And every legend needs an origin story. Kitty's People is a biographical novel, the intimate portrait of Kitty Flanagan from her youth as the daughter of Irish immigrants, through her years as a tragedy-plagued young mother and businesswoman, to her rise as woman-in-charge-confident, organized, fierce, and supremely generous. Kitty is the author's grandmother and a role model for our times.
Her story lies at the heart of a multi-generational family saga, revealed in oral histories and archival research. Despite their talents and hard work, the Flanagans in America find themselves in an epic battle: the goals of prosperity and loving family life pitted against the forces of disease, organized crime, alcoholism, fires, a wicked stepmother, abortion, and cold-blooded murder. The Flanagan saga includes the Keville family, the Barrett family, and the Curran family-all energetic Irish Catholics striving to book their passage to the promised land.
What is the setting? The Midwest The story moves quickly from Holy Angels parish on the southside of Chicago to the utopian community of Leclaire, Illinois, the company town of N.O. Nelson Manufacturing, celebrated in the 1894 New York World report by journalist Nellie Bly. The saga continues in St. Louis, in the northside neighborhoods around Holy Rosary Church and in the westside neighborhoods around the Easton Avenue business corridor.
How is this book a historical novel? The story begins during the Gilded Age, when the working class flirted with the ideas of socialism. Then, Kitty grows up to run the Barrett family grocery business. Selling meat and dry goods in a corner store locates the family at the heart of retail innovation in the early twentieth century. But World War I, the Spanish Flu pandemic, Prohibition, and the Great Depression generate a roller coaster of challenges to the grocery business. Agriculture and transportation throughout the Midwest also suffer the devastating effects of heat waves, pipe-exploding cold spells, and massive river floods.
Although the 1904 St. Louis World's Fair celebrates the dawn of twentieth-century scientific progress and technological innovation, the early decades still had no antibiotics, no clue how to manage diabetes, no resources outside of institutionalization for children with brain injuries, no effective birth control, and-despite women's suffrage-no patience for a woman taking charge of her own destiny.
Are there love stories as well? The romance between Moses Flanagan and Maggie Keville is where it all begins. The rules and expectations of Irish culture and the Catholic faith play large in the vignettes of romance throughout their extended family. The Flanagans' daughter Nellie defies the rules. Their daughter Kitty rewrites them.
It is easy to fall in love with Kitty Flanagan. Despite the times, despite her losses, she learns to carry on. She discovers how to keep her head in the game despite a world that keeps slinging trouble her way.
You know Kitty and her people. They are your ancestors, fleeing the Old Country for the promised land of America, hounded by death and disaster. Yet... here we are. They persisted. They endured. They found love and laughter. They are the salt of the earth.