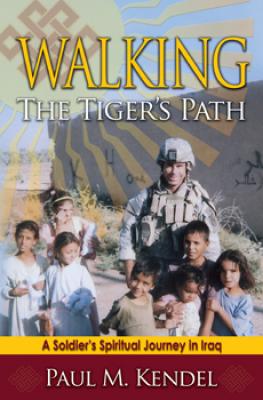 Sent to Iraq in 2005, Paul Kendel found himself confronted with the dilemma of when to pull the trigger knowing he could kill innocents, he patrols the “Triangle of Death” southwest of Baghdad. While facing the violent loss of his friends and the unchecked rage of many soldiers around him, he seeks to maintain his humanity and empathy for Iraqis caught in the middle.

Having emailed the Shambhala Buddhist community, he becomes connected with a spiritual instructor, Margot Neuman of the Ratna Peace Initiative’s Veterans Peace of Mind Project in Boulder, Colorado, and their compelling email correspondence forms a thread that runs through the story. With honesty, he recounts his own struggle with aggression and revenge, literally contemplating Buddhist teachings while sitting behind a M240 machine gun. “If I let this place and the hate that is all around me fill me with aggression and anger,” he wrote while in Iraq,” I will only become like the men whowait in the darkness in the hope of inflicting death upon another human being.”

A unique story that’s both a fast-moving, soldier’s eye view of 21st century war and a personal account of spiritual awakening, Kendel narrates his journey in a voice by turns compassionate, humorous, and sarcastic.