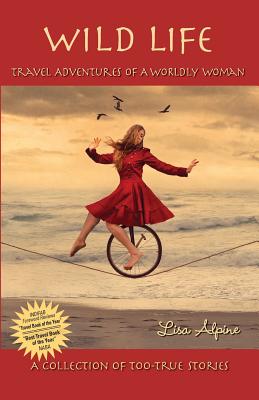 Travel Adventures of a Worldly Woman

From licking a Monet in Paris, to pushing an abusive macho honeymooner off his sailboat in the shark-infested Gal pagos, to saving her toddler son from a charging bull elephant in Africa, these delightful tales will inspire readers to follow the call of a wild life and leave home with their doors unlocked.

"When you're hitchhiking about in foreign lands, whether in France, Morocco, or perhaps New Zealand, it helps-as California-girl Lisa Alpine discovered-to be "young, blond, persistent, and female." And to get along, once you've reached an approximate destination in hardscrabble exotica, you should be friendly, fearless, and sometimes counter intuitively trusting. There is daring, humor, and even a bit of Eros in the fourteen stories that span her life from the innocence of eighteen, when she was struck with wanderlust, into middle age. "I am a woman who wanders and wonders and writes," she explains. And what wandering there's been, beginning in Paris, where she tasted art by licking a Monet. In Vienna, she asked an old woman, who turned out to be a survivor of Auschwitz, where she might find cheap lodging and ended up as the woman's house guest. She met the chauffeur of Keith Richards of the Rolling Stones in Switzerland and was offered a job babysitting Richards's two children, but after witnessing a temper tantrum by Richards's live-in girlfriend, declined and took a job as a bartender, offering free drinks in order to get her slave-driving boss, who held her passport as ransom, to fire her. She had the sort of inevitable adventure that tests us all, coping with her mother's dementia before her death on Mother's Day, 2011. In a bittersweet way, it was probably her most admirable adventure of all." - Foreword Reviews'

"Lisa's love of travel and her fierce determination to push all boundaries, takes the reader with her on a thoughtful, fun and fearless journey. Lisa opens herself and the reader to the world and explores with courage, the physical world around her and the philosophical world within." - Maureen Wheeler, founder Lonely Planet

"I never tire of talking to Lisa Alpine about her exploits, adventures, and fascinating life. She has carved a path that is an inspiration to any free-spirited, or secretly free-spirited, woman." - Constance Hale, author of "Vex, Hex, Smash, Smooch" and "Sin and Syntax"

"Lisa Alpine's winning title tells much about her personal timeline, and the bestiary of good, bad, ugly or rare characters encountered in these sometimes breathless pages." - David Downie, author of Paris to the Pyrenees

"Lisa's stories are not only packed with the humor and adventure that comes from being a solo woman traveler, but also filled with compassion that cuts to the core of what travel is all about-a deep connection to a people and place found when we shed our protective armor and remember we are all human." - Kimberley Lovato, author of "Walnut Wine and Truffle Groves"