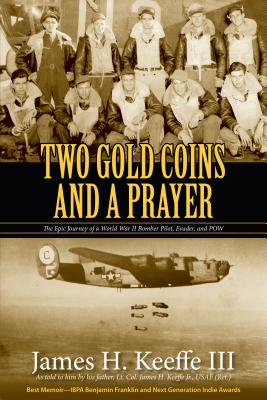 Two Gold Coins and a Prayer

The Epic Journey of a WWII Bomber Pilot and POW

World War II was raging when 19-year old James Keeffe joins the U.S. Army Air Forces. After months of rigorous training as a B-24 heavy bomber pilot, he and his crew arrive in England and begin flying combat missions over Europe. On the 8th of March 1944, during a bombing mission to Berlin, Keeffe's airplane is shot down over Holland, catapulting him into a world squeezed colorless by the ever-tightening fist of Nazi occupation.

Moving from safe house to safe house with the help of the Dutch Underground, Lt. Keeffe, in plain view of the enemy, evades for five harrowing months. During an escape attempt through Belgium he is betrayed, captured and transferred under armed guard to the infamous German prisoner-of-war camp Stalag Luft III.


Praise For Two Gold Coins and a Prayer: The Epic Journey of a WWII Bomber Pilot and POW…

"Impeccably researched and skillfully written, this superb account of Mr. Keeffe’s experience will leave the reader not only amazed, but emotionally moved. This is far away one of the best 8th Air Force evasion and POW accounts that has ever been written. It was a joy and a pleasure to read…" 8th Air Force News

James H. Keeffe III, eldest son of James H. Keeffe Jr., spent his early years traveling the world with his military family. He has been working in IT data networking for the past eighteen years for Group Health Cooperative. He resides in Fall City, Washington with his wife Paula and daughter Reilly.James H. Keeffe Jr., a WWII and Korean War veteran, received his degree in meteorology at UCLA. During his 22 years in the Air Force, he was a pilot, weatherman, and instructor. He lives in Bellevue, Washington with his wife Sandy. They have six children and many grandchildren.
Loading...
or
Not Currently Available for Direct Purchase