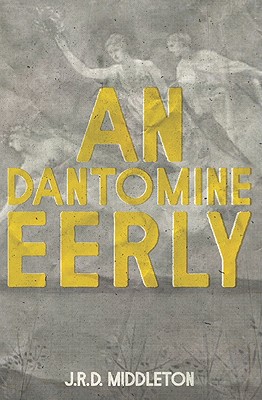 As the Irish-American poet Dallin lay dying he recalls the surreal geography and traumatic events that lead to his end.  An absence in a wind-beaten house suggests a past but somehow still-looming tragedy; vacancy fills a ghostly barroom and the campus of a condemned university; city streets and desolated forests are populated by no one except the formulations of Dallin’s own mind.  The ailed poet and his beautiful, haunting wife Aìsling flee an obscure political persecution that culminates in her planned murder.  The impact of her death afflicts Dallin in ways he cannot comprehend and spirals him into his meeting with the mythic celestial escort, An Dantomine Eerly.

An Dantomine Eerly is fine experimental writing, using narrative techniques, dream-world symbolism, and a poetic style of prose that takes up John Banville’s admittance “to blend poetry and fiction into some new form.”  The novel itself is a re-conception of the 17th century Irish poetic form of the aisling, meaning “dream vision” or “vision poem.”  As Dallin confronts his moment of death, the book assembles itself as a collage of the affinities, falsehoods, and absurdities of memory and reality.

Comparisons to pre-discovery Chuck Palahnuik (Fight Club) and early David Foster Wallace (The Broom Of The System) have been made, as well as the influence of older, experimental works.  The result is a stylized exploration of the infinite world through the microscope of Middleton’s ill-fated narrator, and above all, a promising debut.

"It's experimental, surrealist fiction about the end of a poet's life. Eerly calls back to centuries of Irish literary tradition, from the aisling (a patriotic lyric poem from the 17th century with dozens of bizarre constraints) to James Joyce's giddy molestation of language."

"Identities are never fully clear in this Gothic tale of romance and sex. The language that provides clues as to their appearance and character shines and shifts with something larger than beings of skin and bone. Its language is a liminal one, haunting the borders of life and death, ideas and reality, with a mournful, incendiary resonance. At the heart of this book is a deep romanticism, a dusky tenuity that thwarts and lures, conceals and reveals, confusing actuality with hallucination . . . [An Dantomine Eerly] sounds as if Charles Bukowski had suddenly been possessed by the spirit of Matthew Arnold. As if Dover Beach suddenly became Venice Beach, and the acerbic barfly a quixotic scholar gypsy. . . Middleton's language is chimerical."

John Olson, author of Souls of Wind and The Nothing That Is

JARRET RICHARD DEVLIN MIDDLETON was born in Boston, Massachussetts in 1985, and spent most his life at his home in seacoast New Hampshire.His first novel, "An Dantomine Eerly," is an unorthodox narrative that follows the last self-revealing thoughts of the Irish-American poet Dallin as he passes into death. The book was released in March of 2010 by Dark Coast Press in Seattle.From 2002-2005 Jarret acted as organizer, spokesperson, and editor for many radical left groups. His essay, "An Open Letter Concerning The Student Left," was his last political piece from that time and was published in Slingshot Magazine (#87, Summer 2005) and released in a large print-run booklet.Jarret studied writing at Concordia University and the University of New Hampshire, leaving college after two years to travel the U.S. and write. His early works include: "Station Wagon Nightmares," a travel chronicle of six months on the road, and the chapbooks "Misery State Veterans" and "I-LXIV," along with screenplay collaborations in New York. Middleton's work is lyrical, abstract, erudite and playful, strictly adhering to a belief that literature is best not when it is "about" experience, but is experience itself. He lives in Seattle, WA.
Loading...
or
Not Currently Available for Direct Purchase