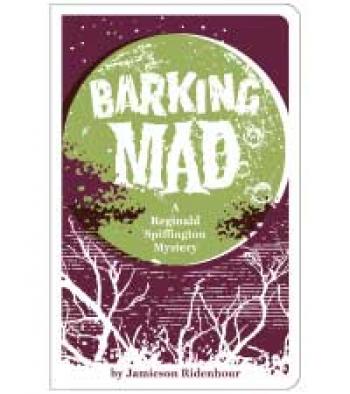 The year is 1931. The scene is wolfishly classic English fare. And tonight the moon hangs as full as a royal pie plate in this inaugural Reginal Spiffington mystery. Our none too obsequious playboy, Reggie, sets out for a delectably long weekend at Huffsworthy Hall to assist his dear friend, Moony, in his failing endeavor to take the hand of his lady-love and to partake in the culinary talents of the genius chef running the kitchen. With no one reason more important that the next, he'll be off straight after breakfast.

Reggie's itinerary for the weekend turns abruptly less toothsome when he decides to solve the unexpected murder of another of the Hall's guests, a guest whose luggage is secretly packed full of nefarious plans. Soon, all Huffsworthy's inhabitants are potential suspects, including Reggie's saucy, wuick-witted love-interes, Mimsy Borogrove. Aided by his invaluable valet, Pelhma, and armed only with his knowledge of detective novels and a newly acquired set of keener, canine senses, Reggie sets out to find the killer before another meal falls to ruin.