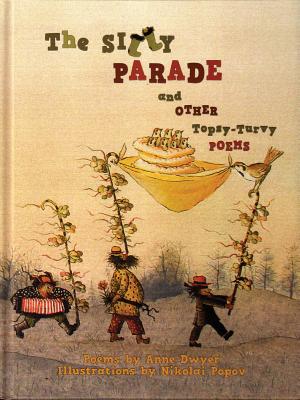 The Silly Parade and Other Topsy-Turvy Poems

- This book is based on a folk poetry, similar to the Nursery Rhymes from Mother Goose- Original cover design that appeals both to children and their parents- Colorful high-quality illustrations from an award-winning artist- The Silly Parade is the perfect way to introduce children to the pleasures of poetry as it teaches them language, sounds, rhyme and rhythmWe are happy to share that The Silly Parade and Other Topsy-Turvy Poems won a Silver Medal at the 2018 Independent Publisher Book Awards: http: //www.independentpublisher.com/article.php?page=2302 (Category 33 - Children's Picture Books (all ages))Have you ever seen a horse drive a sleigh? Can you count up everyone participating in the silly parade? Or do you want to meet Old Man Igor, who does everything topsy-turvy and upside-down? In this book you will find nursery rhymes that are based on traditional Russian songs and folk poetry. These funny and charming poems are brilliantly translated and retold by Anne Dwyer. The timeless illustrations by award-winning artist Nikolai Popov add a touch of gentle humor.

Anne Dwyer is a Russian professor at Pomona College and mother of a toddler living in Claremont, California. She was inspired by the book art of Nikolai Popov to recast Russian children's folklore in a language she hopes will be appealing to children of all ages and places. Nikolai Popov is a well-known Russian visual artist and illustrator. He has won multiple gold medals and Grand Prix at international exhibitions of children's book illustration. Popov has had personal exhibitions in many cities of the world, including Moscow, Tokyo, Rome and Venice. He is an honorary member of the Russian Academy of Arts.
Loading...
or
Not Currently Available for Direct Purchase