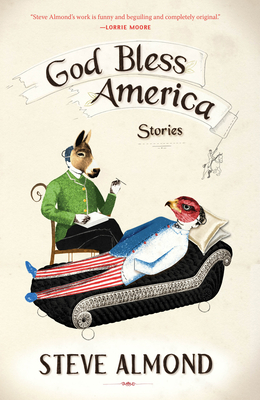 FINALIST, FOREWORD BOOK OF THE YEAR

From a "gifted storyteller" who delivers "always enjoyable, often hysterical stories" (New York Times Book Review) comes a meditation on the American Dream and its discontents. In his most ambitious collection yet, Steve Almond offers a comic and forlorn portrait of these United States: our lust for fame, our racial tensions, the toll of perpetual war, and the pursuit of romantic happiness.

In the exuberant title story, a hapless would-be actor, desperate to escape the drudgery of his existence, lands the role of a lifetime. In "Donkey Greedy, Donkey Gets Punched," reprinted in Best American Short Stories, a psychoanalyst with a secret gambling addiction squares off over the poker table against a damaged ex-patient. In "First Date Back," a young woman becomes the target of a traumatized soldier's misguided hopes for love. And "A Dream of Sleep," the collection's final story, presents a grief-stricken refugee who tends the graves of a forgotten cemetery, only to have his fragile peace shattered by an unwelcome visitor.

Each of these thirteen stories is an urgent investigation of America's soul, its particular suffering, its injustices, its possibilities for redemption. With deft sleight of hand, Almond, "a writer who knows us as well as we know ourselves" (Houston Chronicle), leavens his disappointment and outrage with a persistent hope for the men and women who inhabit his worlds. God Bless America offers us an astonishing vision of our collective fate, rendered in Almond's signature style of "precise strokes . . . with metaphors so original and spot-on that they read like epiphanies" (San Francisco Chronicle).

Steve Almond is the author of eight books of fiction and nonfiction, including the New York Times Bestsellers Candyfreak and Against Football. His most recent story collection is God Bless America. His stories have been anthologized widely, in The Best American Short Stories, The Pushcart Prize, Best American Erotica, and Best American Mysteries series. His essays and reviews have appeared in the New York Times Magazine, the Boston Globe, the Washington Post, and elsewhere. He teaches at the Nieman Fellowship for Journalism at Harvard, and hosts the New York Times podcast "Dear Sugars" with fellow writer Cheryl Strayed.
Loading...
or support indie stores by buying on