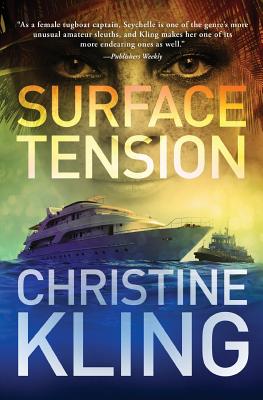 SURFACE TENSION is the first in this suspense series featuring Florida tug and salvage captain Seychelle Sullivan. As a woman in a man's world, Seychelle has to work twice as hard just to compete. Some have even called her reckless. In her view, she's just doing her job, salvaging boats and people's lives. On a steamy Florida morning Seychelle answers a Mayday call launched from the five-million-dollar Broward yacht, the Top Ten. Racing her fiercest competitor for salvage rights, Seychelle has a personal stake in this rescue. Her former lover, Neal Garrett, is the yacht's hired skipper. But being the first to reach Top Ten leads to a bloody payday when Seychelle finds a beautiful woman with a knife in her back - and Garrett is nowhere to be found. While the police treat her as the prime suspect, Seychelle begins to unravel a tangled plot connecting human predators with innocent victims, and a mystery on land with a mystery buried deep beneath the sea. Now, to find out what really happened to Neal, Seychelle must retrace his last steps through two murders and a horrific crime wave, to a final confrontation beneath the surface of the sea with someone who may want to kill her . . . or be her salvation.

Christine Kling has spent more than thirty years messing about with boats. It was her sailing experience that led her to write her first four-book suspense series about Florida female tug and salvage captain Seychelle Sullivan. Christine earned an MFA in creative writing from Florida International University and her articles, essays, and short stories have appeared in numerous magazines and anthologies. The first novel in the Shipwreck series, Circle of Bones, was released in 2013, and Dragon's Triangle continues the adventures of Riley and Cole. Having retired from her job as an English professor at Broward College in Fort Lauderdale, Christine sails the waters of the Pacific, the Atlantic, and the Caribbean with her pup Barney, the Yorkshire Terror, and she goes wherever the wind and good Wi-Fi may take her.
Loading...
or
Not Currently Available for Direct Purchase