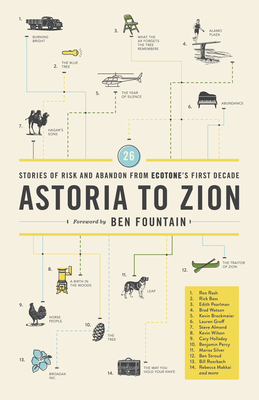 Twenty-Six Stories of Risk and Abandon from Ecotone's First Decade

In his introduction to The Best American Short Stories 2008, Salman Rushdie called Ecotone one of a handful of journals on which "the health of the American short story depends." Now at the close of an award-winning first decade, the magazine has established itself as a preeminent venue for original short fiction from both recognized and emerging writers, with more than twenty stories from sixteen issues reprinted or noted in the Best American, New Stories from the South, Pushcart, and PEN/O. Henry series.

With the publication of this anthology, Lookout Books makes a permanent home for the vital work of Ecotoneregular contributors Steve Almond, Rick Bass, Edith Pearlman, Ron Rash, Bill Roorbach, and Brad Watson, along with rising talents Lauren Groff, Ben Stroud, and Kevin Wilson, among others. In keeping with the magazine's mission to reimagine place, the collection explores transitional zones, the spaces where we are most threatened and alive. From a city fallen silent to a doomed nineteenth-century ship, from a startling birth in the woods to the bog burial of an adored archaeologist, from the loop of hair in a drowned trader's locket to the sanctity of pointy boots in a war zone, these stories make beautiful noise of our most fundamental human longings.