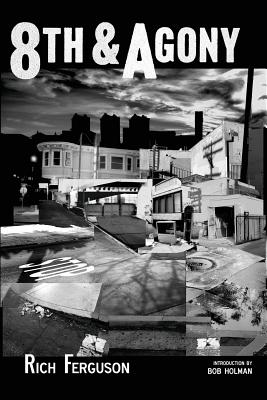 In this book you will find a diverse style and approach to poetry and prose writing that speaks of a lyrical lifetime experience not usually apparent in a premiere collection for a writer. Along with the experience, there is the craftsmanship of a songwriter, a modern bard of contemporary musicality. This book is an amble down the open road as well as the dark alley ways and then across a soft beach sand and on into vibrant sunsets that shine on contoured boulevards of dreams both broken and healing. 8th & Agony is a broad tapestry of wordsmithing that has been assembled here in an open parade of personal triumphs and pitfalls that coincide with the scope and vision of a writer who has tuned his work through the trials of performance in a way that has shared this experience with numerous audiences and now has been laid bare for the record here in these pages. Rich Ferguson is a well-heeled spoken word performer that brings a thespian musicianship to the stage along with a storied amount of influence and knowledge of the word, hence the diversity of style and content in this collection. This work is an exploration of poetic road mapping that convenes inside the travelogue of a life experience that touches on all the muses have to bring to bear in this world.

Rich Ferguson has performed across the country and has shared the stage with Patti Smith, Wanda Coleman, Exene Cervenka, T.C. Boyle, Loudon Wainwright, Bob Holman, and many other esteemed poets and musicians. He has performed on The Tonight Show, at the Redcat Theater in Disney Hall, the New York City International Fringe Festival, the Bowery Poetry Club, the South by Southwest Music Festival, the Santa Cruz Poetry Festival, the DocMiami International Film Festival, the Topanga Film Festival, and Stephen Elliott's "Rumpus." He is also a featured performer in the film, What About Me? (the sequel to the double Grammy-nominated film 1 Giant Leap), featuring Michael Stipe, Michael Franti, k.d. lang, Krishna Das, and others. He has been published in the LA TIMES, has been anthologized by Uphook Press (gape-seed), Smith Magazine (The Moment), TNB Books (The Beautiful Anthology), spotlighted on PBS (Egg: The Art Show), and was a winner in Opium Magazine's Literary Death Match, LA. Ferguson is a Pushcart-nominated poet, and also a regular contributor and poetry editor to the online literary journal, The Nervous Breakdown.
Loading...
or support indie stores by buying on