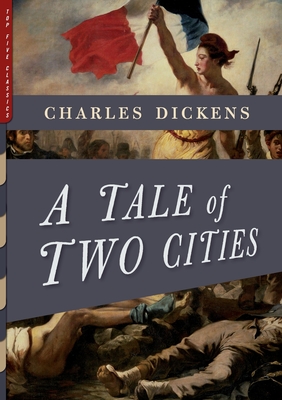 A Tale of Two Cities (Illustrated)

With More Than 40 Illustrations by Frederick Barnard and Hablot K. Browne ("Phiz")

In 1775 Doctor Manette is reunited with his daughter Lucie after having been locked away in the Bastille for 18 years. Lucie nurtures her half-mad father back to health, but their troubles are far from over, as their lives become entangled with Charles Darnay, the emigrant son of the Marquis St. Evr monde; the ne'er-do-well Sydney Carton, and the vengeful Monsieur and Madame Defarge. Set against the terror and turmoil of the French Revolution, A Tale of Two Cities is one of Charles Dickens's most enduring works-a historical adventure of high drama and profound depth.

This Top Five Classics edition of Charles Dickens's immortal A Tale of Two Cities includes the original unabridged text, more than 40 illustrations from the 1859 first edition by "Phiz" (Hablot K. Browne) and from the 1872 edition by Frederick Barnard. In addition, it features a foreword by Dickens scholar and novelist Andrei Baltakmens (author of The Raven's Seal and A Hangman for Ghosts).