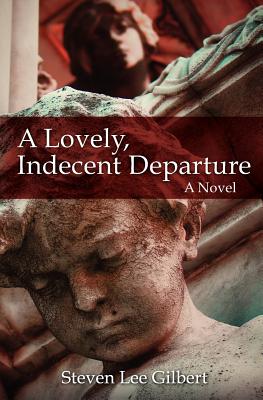 A Lovely, Indecent Departure is the riveting and emotionally-charged debut from a promising new voice in literature, and a captivating story of a mother's love and desperation set amidst the heart wrenching landscape of child custody.

Anna Miller wants only one thing, her son, and she will do anything to keep him. When a district court awards custody of Oliver to his father, she abducts the five year old and flees to Italy where with her family's help they disappear into the fabric of her native homeland. Told in prose that is both stripped-down and overpowering, Gilbert shapes the everyday conflict of child custody into a stunning search for sense of worth. Standing in the young woman's way is Evan Meade, the boy's guileful and mean-spirited father, who hires a private investigator when the efforts of the embattled local sheriff, Monroe Rossi, fail to track them down. But as the investigation draws them all closer to Anna, Evan's true nature betrays itself and the question of what's in the child's best interest becomes not so clear anymore

Objectively detailed, in a voice that refuses to intrude on the minds of its characters, A Lovely, Indecent Departure, captures in stark detail a world in which modern archetypes are turned upside down and shows what an extraordinary splash Steven Lee Gilbert has made with his first novel.

Steven Lee Gilbert was born in Fort Wayne, Indiana but considers his childhood home the green, rolling foothills of East Tennessee and the southern Appalachia mountains, settlement to all sorts of interesting people, composites of which can be found throughout his writing. Most of his adulthood he's spent in the Sandhills and Piedmont of central North Carolina, where he lives now with his wife and family. Steven received his B.A. in English from the University of Tennessee in Knoxville, after which he was commissioned and served four years as an officer and paratrooper in the U.S. Army. While in school he had the pleasure of learning from Wilma Dykeman and in 2007 had the opportunity to work with Barry Hannah, both of which greatly influenced his writing. The next year, Steven was awarded a Durham Arts Council Emerging Artist Grant for Literature. He has also received recognition for his work as a writer from the Tennessee Writers Alliance. His work has been published in the Raleigh News & Observer, The Independent Weekly, Diabetes Health, and at Lifescripts.com. He is also the author of the blog, Without Envy. A Lovely, Indecent Departure is his first novel. You can read more about him at www.stevenleegilbert.com.
Loading...
or support indie stores by buying on