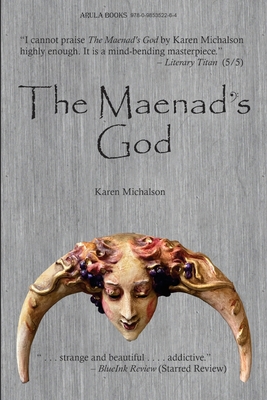 A seamless blend of psychological thriller, dark satire, magical realism, romance, and myth, The Maenad's God is the story of a war that's been fought for thousands of years; the war between the ancient arts of music, poetry, and love; and the equally ancient forces of artistic envy, oppressive law, and authoritarian religion.

"Consider this a kind of prayer to the heartless void, for I am now in joyless communion with a dead god."

Boston 1992. Pete Morrow is a misanthropic FBI agent whose only escape from the colleagues and society he despises is through reading literary classics. When his boss sends him to warn away a drug dealer on an obscure army base, he discovers a murder and becomes obsessed with Jade McClellan, a mysterious man from Toronto whose rock band just performed at the crime scene. Tough-guy Morrow has never been in love before-but Jade is almost magical, an embodiment of myth and literature who creates living fantasies that rapidly become the only thing Morrow values in his otherwise miserable life.

But there's a problem. Morrow is investigating a mafia family that is investing in Jade's musical career. Being open about their relationship could get both of them killed.

Morrow's murder investigation annihilates his hard-boiled understanding of reality when he learns that Jade is an abandoned, mortal son of Dionysus, the god whose energy informs hard rock. Jade's mafia support is being arranged by Dirty Penny Starmaker, a witch who started life in 5th century BCE Athens, where she received a divine mandate to promote brilliant musicians throughout history. Penny is in a centuries-old war with Hugh McCrae, a primeval, human-like "monster" who has currently incarnated himself as a congressional aide with an unhealthy interest Morrow's work. McCrae (rhymes with "decay") carries his own divine mandate to promote cultural decline by eradicating creativity and art. At the present time, this includes Jade, his music, and Morrow's newfound happiness.

After all, the universe must balance, no matter who gets destroyed in the process.