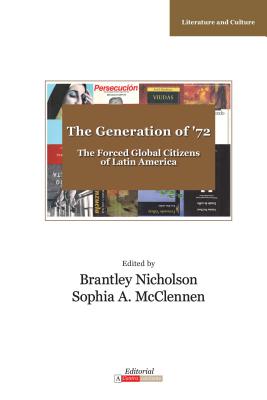 Caught between the well-worn grooves the Boom and the Gen-X have left on the Latin American literary canon, the writing intellectuals that comprise what the Generation of '72 have not enjoyed the same editorial acclaim or philological framing as the literary cohorts that bookend them. In sociopolitical terms, they neither fed into the Cold War-inflected literary prizes that sustained the Boom nor the surge in cultural capital in Latin American cities from which the writers associated with the Crack and McOndo have tended to write. This book seeks to approach the Generation of '72 from the perspective of cosmopolitanism and global citizenship, a theoretical framework that lends a fresh and critical architecture to the unique experiences and formal responses of a group of intellectuals that wrote alongside globalization's first wave.

Brantley Nicholson is a visiting professor and President's College Associate in the Department of Latin American and Iberian Studies at the University of Richmond. Sophia A. McClennen is Professor of International Affairs and Comparative Literature at the Pennsylvania State University, University Park, where she directs the Center for Global Studies. Her most recent books are Colbert's America: Satire and Democracy (Palgrave 2012) and Neoliberalism, Terrorism, Education co-authored with Jeffrey Di Leo, Henry Giroux, and Ken Saltman (Paradigm 2012).
or support indie stores by buying on