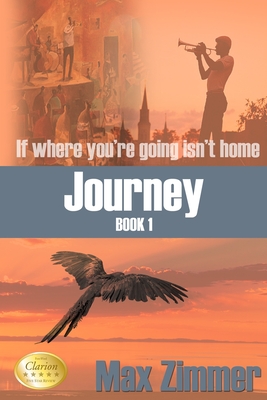 Journey (If Where You're Going Isn't Home)

"Journey," the groundbreaking first book of the series "If Where You're Going Isn't Home," is a recipient of a coveted ForeWord Clarion Five Star Review.It begins in 1956 when young Shake Tauffler hears a line of music on the radio of a cattle truck and discovers his dream to play jazz trumpet. His family is moving one last time - from a southern Utah ranch to a town outside Salt Lake - on his father's quest to bring his family from Switzerland to the heartland of the Mormon church. In two months, when Shake turns twelve, he'll join his buddies on a shared journey through the ranks of his father's take-no-prisoners religion. At the same time, armed with a used trumpet and his bike, he'll start another journey, on his own, to a place whose high priests aren't his father's friends but the Negro greats of jazz, men his religion has taught him to believe are cursed but from whose music he learns everything he dreams of being.Shaded with Huck Finn and James Dean, Shake Tauffler is an American kid we all recognize, a kid who responds to bigotry, abuse, repression, hypocrisy, and death with courage, humor, heartbreak, often pain, and always wonder. His rites of passage are keenly drawn and vividly familiar, his dream to play jazz shared by most any musician. But his ten-year story of growing up Mormon in America takes us to an altogether different place."Journey" and its sister books of the series break new literary ground by finally putting the experience of growing up Mormon in America on the map as a story that readers everywhere can reach from the familiar territory of their own lives. It is meant for those of us who long to hunker down and lose ourselves in a big American story, one whose narrative canvas takes us from Switzerland to a southern Utah ranch, to Salt Lake and its outskirts towns, into the secret holy places of the Mormon Church, across the landscapes of Nevada, California, Las Vegas, Kentucky, Austria, the Mojave Desert. Lyrical, rowdy, unflinching, "Journey" follows Shake across the first three years of his search for the clarity and flight of a trumpet line to guide him to sexual, moral, and musical consciousness. It is a search that resolves - for now - in startling and extraordinary tenderness. Michael Strong, literary agent and co-founder of Zola Books, describes the book this way: "Max Zimmer has written The Great American Mormon Novel. For decades, readers have depended upon a few extraordinary writers to understand fully what it means to be an American - Philip Roth, Julia Alvarez, Ralph Ellison, Erica Jong, John Updike. Zimmer has added a critical new dimension to our shared national understanding of who we are and how we got here in this sweeping narrative. Twelve-year-old Shake Tauffler's decades-long journey through the Mormon Church and beyond will resonate with all Americans who ponder their soul and place in our changing national portrait.

Winner of the Pushcart Prize for his story "Utah Died for Your Sins," hailed as a "raw new voice in American fiction" by Rolling Stone magazine, Max Zimmer was born in Switzerland, brought across the Atlantic at the age of four, and raised in Utah in the take-no-prisoners crucible of the Mormon faith. He earned a B.A. and an M.A. from the University of Utah and was teaching fiction, working on a doctorate in writing, when he was invited east for a summer at Yaddo, the writer's retreat in Saratoga, New York. He never intended to stay in the East. He was here long enough to finish a panoramic novel about the West before returning to his family and friends and the students he loved in Utah. But from Yaddo he took a job teaching fiction in the Writing Arts Program at SUNY Oswego. It was there, in the summer of 1978, that he wrote a long love story that became the genesis for the trilogy "If Where You're Going Isn't Home." From Oswego, he gravitated toward the city, lived and tended bar in Manhattan while he kept working at his craft, met his wife, and eventually moved to the northwest corner of New Jersey, where he settled in to write "If Where You're Going Isn't Home" from the beginning. The East had become his home. Utah had become a place he was from, a place he wrote about. Max's published work includes poems, stories, reviews, magazine articles, short biographies, and liner notes for jazz albums. Success came fairly quickly once he started writing. Following its nomination by Ray Carver, his first published story "Utah Died for Your Sins" was awarded the Pushcart Prize, and singled out in Rolling Stone magazine as a raw new voice in American fiction. He has read at venues ranging from coffee shops to SUNY writers' conferences to the Pen New Writers Series. Jack Cady, Grace Paley, Lewis Turco, and John Gardner are among other established writers who have expressed high regard and admiration for his work. E. L. Doctorow called his work the best he'd seen in a coast-to-coast college tour following the release of "Ragtime." After meeting Max on a similar tour after "Falconer" was published, John Cheever enthusiastically promoted his work for the last five years of his life. You can learn more about Max and his work and share your own thoughts and stories with him at www.maxzimmer.com.
or support indie stores by buying on