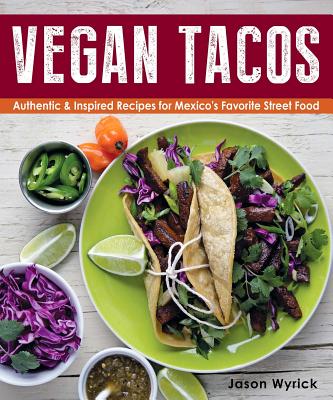 Before The Taco Cleanse, there was Vegan Tacos. Chef and expert Jason Wyrick shows how to make meatless versions of Mexican tacos from the tortillas, to the fillings, to the sauces.

Celebrated chef Jason Wyrick showcases the excitement of Mexican flavors and textures with recipes for traditional and creative tacos you can make at home, featuring your own homemade tortillas, salsas, and condiments.

You’ll make tacos de asador, tacos cazuela, tacos dorados, and many more based on recipes gathered from across Mexico, and the author shows you how to make them all using plant-based ingredients. The long-time publisher of the Vegan Culinary Experience (now TheVeganTaste.com) points the way to making your own taco components from scratch, while also providing quick options with store-bought ingredients.

In your own home taquería, you’ll be making tantalizing recipes such as:

In these pages, the author shares his passion for tacos with sections on taco culture and history, essential ingredients, anecdotes, and shortcuts that simplify the cooking techniques for the modern kitchen. There is also a chapter of beverage recipes such as Mango Lime Agua Fresca, Sweet Tamarind Tea, and Desert Sage Spritzer; a section on desserts, and how to host a taquiza (taco party). Full color photos.

"Between this dish and Wyrick's many other variations on the vegan-taco theme, our Meatless Mondays (and Tuesdays, and Wednesdays...) are looking a lot more interesting." (Cookbooks 365)

Jason Wyrick is an executive chef, cooking teacher, caterer, a former diabetic, and founder of the world's first vegan food magazine, The Vegan Culinary Experience. He co-authored the New York Times best-selling book 21-Day Weight Loss Kickstart with Neal Barnard, MD, and has taught alongside many medical and dietary professionals. Jason was the first vegan culinary instructor in the Le Cordon Bleu program. He has catered for major corporations, including Google and taught hundreds of vegan cooking classes worldwide. His work has been featured in the New York Times, Vegetarian Times, and on both local and national television.
Loading...
or
Not Currently Available for Direct Purchase