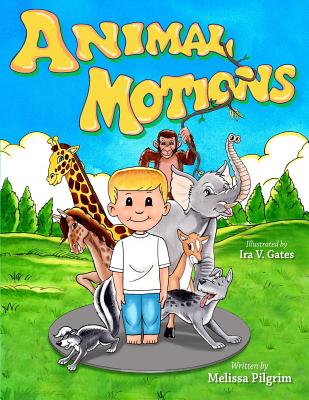 About the Author: Melissa Pilgrim has over 15 years of experience writing for projects in all mediums-film, TV, theatre, and book publishing. She has had 16 plays for children and teens produced, 4 screenplays optioned, 1 TV series optioned, and has worked on over 12 books with authors from L.A. to N.Y.C. Melissa was the artistic director for The Sheil Park Players, a community theatre in the Wrigleyville area of Chicago, for almost 5 years where she produced and directed 16 original shows and worked with adults and children of all ages. Animal Motions is her first children's book. About the Illustrator: Ira V. Gates has over 25 years experience working as a graphic artist for both newspapers and magazines. His work has won numerous awards, including "Best of Gannett's Newspaper Illustrations" and placing 2nd in the "National Society of Newspaper Illustration & Layouts Awards." He illustrated the book As the River Flows by Earl Bowden and has also done illustrations for various magazines and ad agencies including Florida Outdoors Sportsman and the Weekender. Animal Motions is his first children's book.
Loading...
or support indie stores by buying on