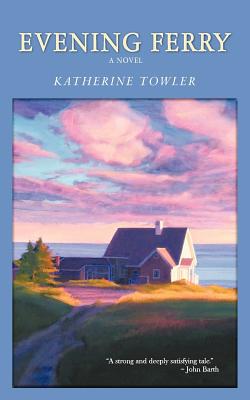 Katherine Towler returns to Snow Island with "Evening Ferry" - the second installment of her multigenerational trilogy about family bonds, unexpected love, and the threat of war. Thirty-two-year-old Rachel Shattuck grew up on Snow Island but left at the age of eighteen, anxious to escape the confines of the isolated community. Living on the mainland, just a short ferry ride away from Snow, she struggles to adjust to being divorced while grieving the recent death of her mother. In the summer of 1965, she returns to Snow Island to care for her injured father and discovers her mother's diaries hidden in a closet. Reading Phoebe Shattuck's account of her life as a wife and a mother, Rachel learns the truth about her family's history, her mother's death, and her own aspirations to lead a new life. In elegant prose and inspired storytelling, Towler gives us a moving portrait of two women and the island they come to call home, at a time when the world is changing, and the country faces war once again.

Rachel Shattuck is at a crossroads at the opening of Evening Ferry, after her recent divorce and the death of her mother. How would you describe where she stands at the book’s end and the journey she has made?

The structure of the novel presents two voices—Rachel’s point of view and the first person voice of Phoebe in the diaries—and two time periods. How do the shifts in voice and time affect your understanding of both Rachel and Phoebe? Is the structure of the book effective and what does it achieve?

Why does Nate want Rachel to read her mother’s diaries? And why does Rachel read them in secret, trying to prevent her father from dis­covering that she has read them?

The Vietnam War hovers in the background of the story. Is the war sig­nificant? Why do you think the author set this book in 1965 and 1966 rather than 1969 or the early 1970s, when American involvement and anti-war sentiment were at their strongest?

Phoebe struggles with her role as a mother, especially to Andy, her dis­abled child. Is Phoebe’s response to being a mother surprising? Did her handling of the decision to institutionalize Andy change your under­standing of Phoebe in any way?

Readers have commented that the island itself is a character in both Snow Island and Evening Ferry. Do you think this is true? How does the island setting inform the story? Could this story take place some­where else?

Evening Ferry is the second volume of a proposed trilogy. Why do you think Katherine Towler chose to jump 20 years ahead of Snow Island in this volume and to focus on a different set of main characters? What does this achieve?

War is an underlying theme in Snow Island and Evening Ferry. How does Katherine Towler explore this theme?