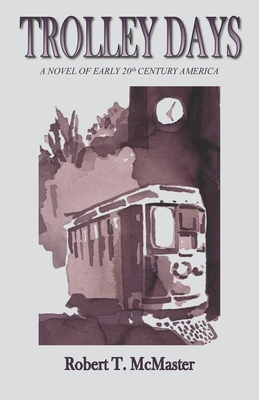 "A joyful, engaging read from beginning to end...." Mark Ashton, Southbridge Evening News
"A special gem of historical fiction...McMaster is a writer to watch." Winston Lavallee, author of "Dancing in the Dark" and "Tempest in the Wilderness" Trolley Days is the story of an unlikely friendship between two boys growing up in Holyoke, Massachusetts, in the nineteen-teens. Jack Bernard is the son of a mill worker who emigrated from Canada, Tom Wellington the son of the mill owner. Jack is shy and socially a bit awkward, Tom self-assured and smooth-talking. But for all their differences, the two boys have much in common. They love fishing, sports, and all manner of youthful tomfoolery. Each has suffered the loss of a sibling, tragedies that have affected both families deeply. In the opening chapter a blizzard is approaching as Jack boards a train for the long trip to Boston. He has received a cryptic letter informing him that Tom is in a Boston jail. Despite a recent falling-out between the two, Jack still considers Tom his best friend, and he refuses to allow a snowstorm to prevent him from going to Tom's aid. Soon Jack will be plunged into a mystery that calls on all his courage and determination to solve, even as his friend's life hangs in the balance. Tosave his friend, Jack will need the assistance of Tom's sister, Anne, but that will require Jack and Anne to reconcile their fractured relationship. Does friendship have its limits? Can bonds of trust, once broken, be repaired? Can we learn from life's tragedies and move on, or must we carry them like lead weights on our hearts forever? In Trolley Days it seems it is the young who bear the heaviest of life's burdens and must marshal the strength to free themselves and their parents.

"A joyful, engaging read from beginning to end...." Mark Ashton, Southbridge Evening News
"A special gem of historical fiction...McMaster is a writer to watch." Winston Lavallee, author of "Dancing in the Dark" and "Tempest in the Wilderness"

Robert T. McMaster grew up in Southbridge, Massachusetts, a New England mill town. He holds a B.A. from Clark University and graduate degrees from Boston College, Smith College, and the University of Massachusetts. He taught biology at Holyoke Community College in Massachusetts from 1994 to 2014. His parents' reminiscences of growing up in early 20th century America were the inspiration for his first two novels, Trolley Days (2012) and The Dyeing Room (2014).
Loading...
or support indie stores by buying on