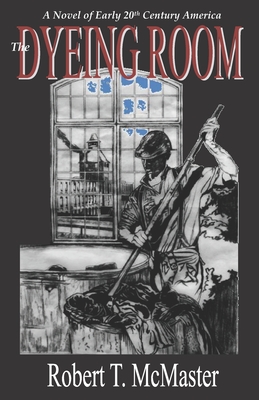 Spring - 1917. War is raging in Europe and America has just cast its lot against the German war machine. Back home, the nation is reeling with social strife: workers marching for their rights, immigrants demanding fair treatment, suffragettes clamoring for the vote. In Holyoke, Massachusetts, seventeen-year-old Jack Bernard has a new job at one of the city's largest textile mills, hoping to save money for college. Meanwhile, his friend, Tom Wellington, appears to have taken control of his demons and set himself on a new course. Soon the lives of both young men, their families and friends, will be torn asunder by forces and events far beyond their control. The Dyeing Room, Robert T. McMaster's second novel, is an absorbing blend of adventure, mystery, and romance populated with characters so life-like they seem to leap from the pages and materialize before our very eyes. Readers young and old will be captivated by this story from a century past, the world of our forebears, an era that, however distant, still speaks to us across the generations.

Praise For The Dyeing Room…

"...an engaging story contrasting the lives of two families...in Holyoke, Massachusetts, shortly before World War I... McMaster's sensitive descriptions of his characters, the parents, children, friends and rivals, tell a lot about commonality specific to that era and what is timeless."
- Laura Krawitt, Director, Héritage Winooski Mill Museum, Winooski, Vermont


"The Dyeing Room reconstructs day-to-day life in Holyoke on the eve of World War I. Labor unrest is simmering in the city and the movement for women's rights is gathering momentum...[a] compelling and carefully-researched story..."
- Eileen Crosby, Archivist, Holyoke Public Library, Holyoke, Massachusetts

Robert T. McMaster grew up in Southbridge, Massachusetts, a New England mill town. He holds a B.A. from Clark University and graduate degrees from Boston College, Smith College, and the University of Massachusetts. He taught biology at Holyoke Community College in Massachusetts from 1994 to 2014. His parents' reminiscences of growing up in early 20th century America were the inspiration for his two novels, Trolley Days (2012) and The Dyeing Room (2014).
Loading...
or support indie stores by buying on